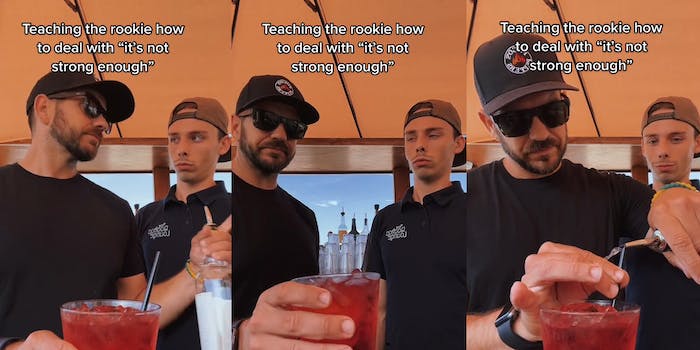 ‘Order a double’: Bartender shows off ‘hack’ for when customers complain about weak drinks

'If I thought my drink wasn't strong enough, I would simply order another.'

A bartender went viral on TikTok where he revealed a trick he uses when customers complain about weak drinks.

@soberbartender19 posted a video where it features himself and a co-worker. He brings over a mixed drink and tells the worker to “watch this.” He takes out a bottle of liquor and pours some into the straw. The overlay reads, “teaching the rookie here how to deal with ‘it’s not strong enough.’” The caption reads, “order a double.”

The video has been viewed 4.8 million times since it was posted on July 13. Some of the viewers suggested different solutions instead of sending the drink back.

“Why can people not just order a double??” one person asked.

“I don’t tip…. or buy drinks lol. bring my lil minis in, order a water… fill up my glass with clear tequila all night,” a third said.

“Pour a little of your liquor. Dip straw and flip. Then mix. Wastes less liquor,” a fourth wrote.

“If I thought my drink wasn’t strong enough, I would simply order another,” a fifth commented.

Other people stated how they have the opposite problem, where they don’t want to taste the alcohol.

“I’m the opposite always going up to ask for it to be dialed down lol,” one user stated.

“My problem is it’s always too strong,” a second said.

“I on the other hand always find it too strong so I go order a sprite,” a third agreed.

“I never understood this. I don’t wanna taste my alcohol,” a fourth wrote.