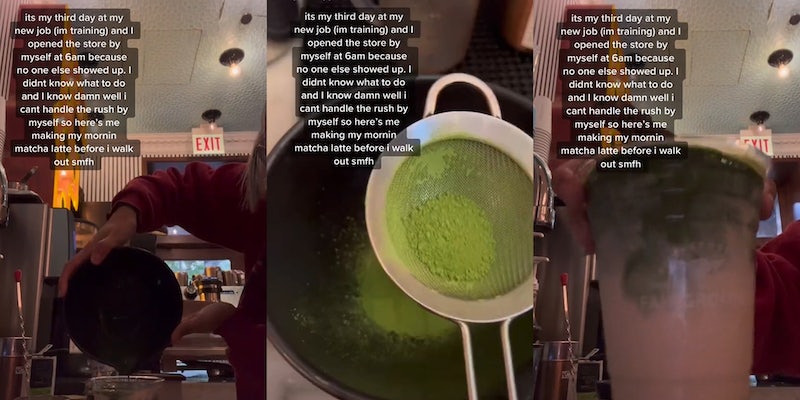 New barista opens store by herself at 6am after no one else shows up. She makes a matcha and leaves

'I know damn well i cant handle the rush by myself.'

A barista said she showed up on her third day on the job at a coffee shop, only to be the only one who did. They said that rather than stay to handle the rush by themselves, they made themselves a matcha and walked right on out.

TikTok user Keyz @keyztohappiness, who says she uses they/she pronouns in their bio, filmed herself making an iced matcha latte.

“Its my third day at my new job (im training) and I opened the store by myself at 6am because no one else showed up. I didnt know what to do and I know damn well i cant handle the rush by myself so here’s me making my mornin matcha latte before i walk out smfh,” the TikToker wrote in the text overlay of the video, which has been viewed over 20,000 times.

“Good thing i have 4 years of experience but man i love being useD by big companies bEcause they dont have their sh*t together,” the TikToker added in the caption.

Many TikTokers praised Keyz for standing her ground and not allowing her new job to set a precedent she wasn’t comfortable with from the get go. Others said they’ve had difficulty even receiving training at their new job as a barista, while some mentioned that they, too, were put in this exact same position.

“Lmao same exact thing happened to me but it was my 2nd day and a Friday. I wish I had done the same,” one claimed.

“Good for you, don’t let them walk all over you!!!” another added, with another similarly lauding Keyz and noting they probably don’t get paid enough to stay for a rush.

There are reportedly a lot of open job positions, with corporations struggling to fill them. CNBC reports that “Many experts believe worker shortages will be a long-term feature in the U.S. economy, not just because of the Great Resignation, but because of demographics.” The outlet noted that supply chain issues have only exacerbated a worker shortage as there’s been an inundation of initiatives, many of them state-subsidized, to rebuild infrastructures necessary to helping bring business operations up and running across the board.

Since there are more jobs and opportunities available, workers may seek out more enticing career paths and contract positions in lieu of other jobs. When you factor in that some of these jobs created to re-invigorate the supply chain require additional skill training and the acquisition of specialized skills, some Americans are spending their time learning a new trade instead of filling jobs in industries that have relatively paid significantly less than specialized work.

Cara Christopher, a Senior Vice President for Idaho-based market consultant Lightcast told CNBC that the slowing U.S. population growth has also contributed to understaffing. “I think we’re going to continue to see a labor shortage. So, it’s really on employers and communities to think outside the box, finding dislocated workers,” Christopher said.

When it comes to restaurant and other food service businesses, like cafes and coffee shops, it was reported in the summer of 2021 that on average, each individual company was anywhere from 25-40% understaffed. There are reports that many restaurants are still suffering from employee shortages as of July of 2022.

The Daily Dot has reached out to Keyz on TikTok for further comment.