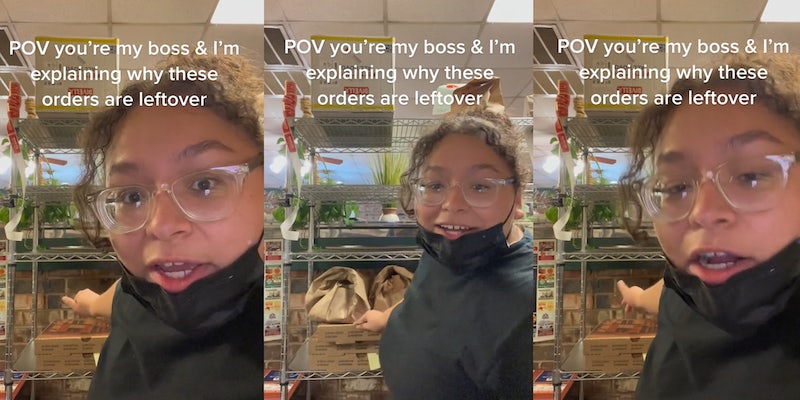 ‘Can’t tell you how many times people call or order from the wrong location’: Restaurant worker reveals why DoorDash orders don’t get delivered

'My husband tried to pick up papa Johns at dominoes once.'

In the viral TikTok video, user @loudsav stands in front of a pizza rack, explaining why a customer may have not received their order.

“DoorDash, they marked that they picked it up and never picked it up,” the TikToker explains. She then places her hand on an order with two pizzas, sharing how “they called the wrong location,” and that the location is “Waco. They called Austin.” She then pulls out a pizza and two bags, stating it was a “server error.” In the text overlay, the creator wrote, “POV you’re my boss & I’m explaining why these orders are leftover.”

In a comment, the creator shared the name of the pizza place she works at and the location, “New York style thin crust pizza @ Baris but it’s really in Pflugerville.” In another comment, she says the location is Baris Fine Italian Cuisine.

The video racked up over 381,000 views since it was posted on Sept. 25, resonating with viewers. Many of them shared their experiences with ordering food from the wrong location.

“One time my phone autocorrected and I accidentally sent my Taco Bell order a whole state over,” one user shared.

“I work at chipotle and the amount of times we get people trying to pick up at the wrong location is so funny,” a second recounted.

“I once called New York papa johns and ordered a pizza the delivery driver was like ‘I can’t find your address,’” a third wrote. “It was the same name as my town and a similar zip code.”

“Someone called me and said they called the wrong place and I was silent for like 10secs I didn’t know what to say and then I was just like oh um,” another said.

Other viewers were curious about what @loudsav did with the leftover pizza.

“you get to take them home?” one person asked.

“What y’all do with the food ??” another wrote.

The TikToker responded in the comments, saying, “I ate it whatchu mean lol… I split it up between the coworkers.”

The Daily Dot reached out to @loudsav for comment via TikTok comment, and both Baris and DoorDash via email.