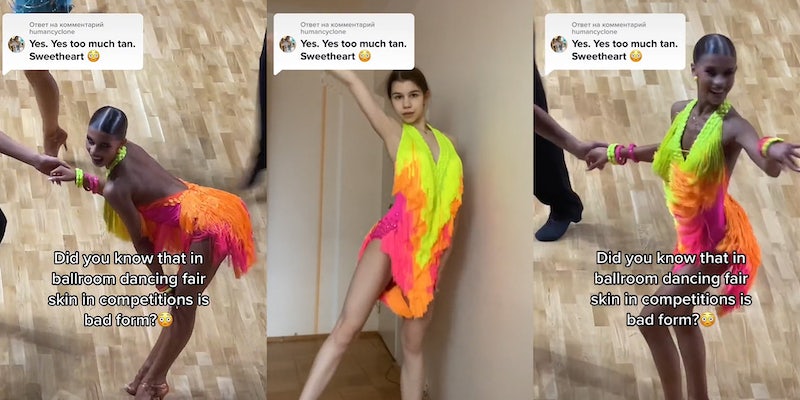 'There is a clear and strong difference between making yourself Black and giving yourself a dark tan.'

A ballroom dancer incited discussion about tanning culture in ballroom dance after she showed herself before and after being tanned for ballroom competitions.

In a viral video posted on July 17, TikToker and ballroom dancer @sibusheva shows videos of herself practicing without a tan and at a competition tanned.

“Too much tan?” @sibusheva in the video’s overlay text. In the caption of her video, the TikToker included three emoji: a white woman, an arrow, and a Black woman.

On Tuesday, her TikTok had over 3 million views.

In response to a comment she received in the video saying that she was too tan, @sibusheva posted another TikTok comparing her skin tone before and after tanning. In the video’s overlay text, she wrote that “fair skin in competitions is bad form” and asked viewers their thoughts.

Her follow up video had almost 7 million views on Tuesday.

Ballroom dance resources state that dancers must tan because it ensures they aren’t washed out by the harsh lighting at competitions—and it hides their sweat. That said, dancers are advised to not “overdo it.”

Some commenters on @sibusheva’s first video about her tan compared it to blackface.

“There is a clear and strong difference between making yourself Black and giving yourself a dark tan,” @achubbycoder commented.

And many commenters came to @sibusheva’s defense on her follow-up video about her tan.

“It’s a rule in the sport, don’t blame the girls blame the system of competition,” @i_am_cyr commented.

“Ya’all acting like she came up with the system bruh,” @chrollussy_ wrote.

“It’s no different to body builders using tan for competitions. It’s just the rules of the sports,” @bethanykatebayliss commented. Body builders utilize tan to “highlight their muscle definition,” according to a resource on the sport.

Still, others said they couldn’t understand the tanning culture.

“I don’t understand why they have a rule for skin tone,” @random.sai commented. “Can’t I just dance all natural.”

“I will never understand why changing someones skin tone is important for some sports. Like how does her being pale change her dancing skills?” @im.your.navi wrote.

The Daily Dot has reached out to @sibusheva via TikTok comment.