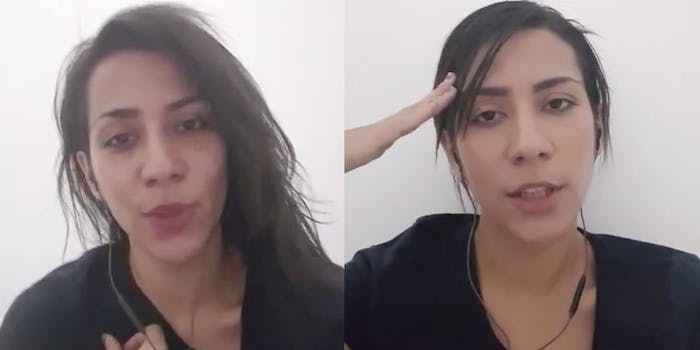 An Iranian beauty queen has been pleading on social media for asylum in the Philippines for two weeks, sparking international concern for her safety.

Bahareh Zare Bahari, 31, who represented Iran in the 2018 Miss Intercontinental pageant, has reportedly been stranded at Manila airport in the Philippines for the past two weeks. Immigration authorities in Manila’s Ninoy Aquino International Airport detained her when she was entering the country from Dubai.

Bahari, a dentistry student in the Philippines, has been documenting her stay at the airport through live streams on Facebook that have received thousands of views.

In a video posted on Saturday, she pleaded to the Philippines government to grant her asylum.

“I have a message for President Duterte,” she said in the video. “Please help me, please. Philippines not safe for me anymore … Please hear me.”

According to a statement from the Philippines government, Bahari is “wanted for an assault and battery” and was “intercepted” when her name appeared on Interpol’s red notice, which said Bahari was a “Iranian fugitive.”

Since Bahari’s story made international headlines, she made another appearance on her Facebook Live on Tuesday thanking her followers and supporters. But she said she has concerns for her safety even in the Philippines.

She said that if sent back to Iran, she would face “long prison sentences, at least 25 years,” and “rape and beating.”  She said as someone who lived in the Philippines for six years, she was expecting the Philippines government to show her support.

In her bio on Miss Intercontinental 2018, she expresses her desire to work towards world peace and peace in Iran. “My wish is that my country will reach to freedom and equality,” she said.

On social media, many rallied for her with the hashtag #SaveBaharBahari, and many argued the call for her arrest came because of her support for Reza Pahlavi, son of former Shah of Iran and a figure heavily associated with the opposition in Iran.

The Philippines should not act on the Interpol red notice (arrest warrant) for this former Miss Iran until it carefully examines her claim that the Iranian government wants her jailed for waving a poster of a prominent critic of the government. https://t.co/jo0tO8q49L pic.twitter.com/6CLF0GQ79h

Yes,this is true.If she deporte to Iran, Mullahs will kill her.Her life is in danger.We demand US goverment to help her .
She is a fan of @PahlaviReza and they want to kill her because of that.#SaveBaharBahari pic.twitter.com/ViBYAZ9FWm

This whole situation is politically and is not because if any alleged assualt, which I am sure did not happen or for champion women's rights, which this regimes doesn't believe in, but only because of her support for Mr Palavi

Bahari say she’s determined not to give in.

“I will not give up, I will never give up … because of the Iranian people,” she said.