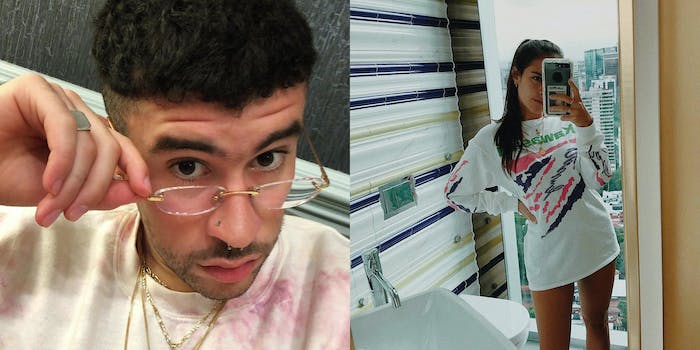 Bad Bunny has been dating model Gabriela Berlingeri since early this year.

El A El Dominio, a Puerto Rican trap artist, claims that Berlingeri cheated on Bad Bunny with him and that he had a relationship with her at the time that she and Bad Bunny began to date.

During an Instagram Live, El Dominio mocked Bad Bunny for taking his “seconds.” He then accused Bad Bunny and his production company of blocking videographers from working with him, claiming that Bad Bunny has interfered with his career ever since the alleged cheating incident.

Neither Bad Bunny nor Berlingeri have addressed the accusations. But there’s a significant backlash on social media from Bad Bunny fans.

“You have got to be the dumbest bitch if you cheat on Bad Bunny,” one tweet said.

Nevertheless, if Berlingeri did cheat on him, some Bad Bunny fans think it could be good for his music. Twitter users said they can’t wait for “part two” of his latest album YHLQMDLG.

The couple was first spotted together at a basketball game in Los Angeles on Feb. 28. About a week later, Bad Bunny posted a series of photos on March 7 promoting YHLQMDLG and featuring Berlingeri.

In the past few months, Bad Bunny has been quarantined with Berlingeri and showing more of his relationship on social media. Fans have fallen in love with the couple, hailing them as an example of true love. Thus, the alleged cheating came as a shock.

As one Twitter user said, if Bad Bunny can get cheated on, then nobody’s safe. “If bad bunny got cheated on how do i know a mf wont cheat on me?” the user wrote.