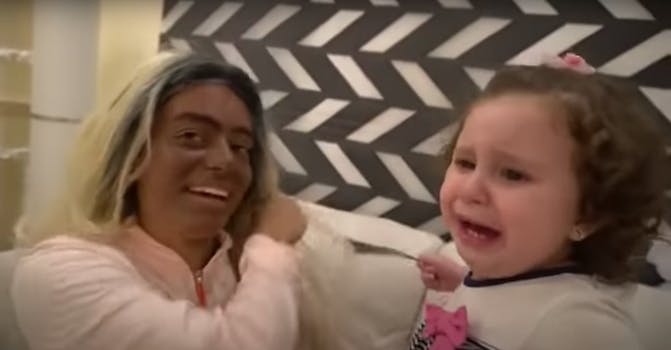 The couple's behavior is under investigation.

A popular Egyptian YouTube couple known as the AZ Family is being detained for four days following accusations that they “traumatized” their child through pranks filmed for the channel, Egypt Independent reports.

Ahmed and Zeinab Hassan, who have nearly 6 million followers on their YouTube channel, are known for making videos with their toddler daughter Aileen.

In a Sept. 5 video, Zeinab wears blackface, puts on a blonde wig, and changes her appearance in order to scare her child. When she approaches Aileen, the child’s face twists into fear, and she turns away.

As adults in the room surround Aileen and laugh, she stares at her mom and begins to cry, turning away when her mother tries to hold her. When Zeinab eventually holds Aileen, the young girl cries more.

The video, which has over 1.5 million views, was met with criticism from viewers who said the couple was exploiting their child for views, per Egypt Independent. A complaint was filed to the National Council for Childhood and Motherhood, which submitted an investigation request to the Public Prosecution.

Sabri Osman, general director of the child helpline with the council, told Egypt Independent that the couple gained fame and popularity at the expense of their child’s welfare.

Osman said the incident constitutes “child abuse” and that the couple could face life in prison and a fine of approximately $51.

Sahar al-Sonbaty, the council’s secretary-general said that the Child Protection Office at the Public Prosecution is investigating the parents’ behavior and also categorized their actions as “child abuse,” citing various child protection laws the couple violated, per Egypt Independent.

Zeinab, who did not immediately respond to the Daily Dot’s request for comment, told Egypt Independent that she was playing with her child and the prank was not intended just for profit.

The National Council for Childhood and Motherhood did not immediately respond to the Daily Dot’s request for comment.