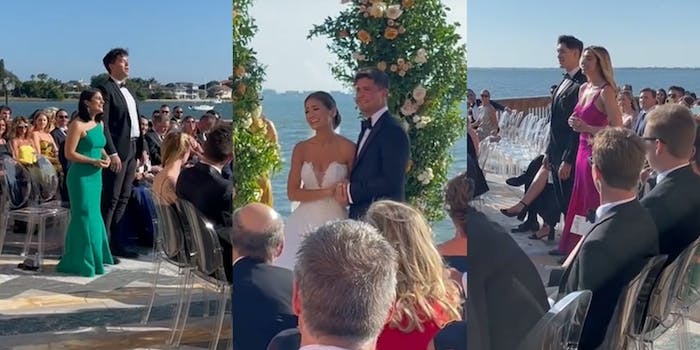 ‘This is so awkward’: TikTok divided over bride’s mid-wedding ‘surprise’ for groom

'I'd kill anyone that did this at my wedding.'

A viral TikTok video from The Bachelor alum Caila Quinn shows what some perceive as an “awkward” wedding surprise for her soon-to-be-husband: a flash mob singing Broadway-style songs in the middle of the ceremony.

Quinn appeared on season 20 of The Bachelor to win an opportunity at capturing potential groom Ben Higgins’ heart and mind. However, she chose Nick Burrello, and the couple married on May 29 in Sarasota, Florida, in what appeared to be a beautiful, outdoor ceremony. But then Quinn shook things up.

“Surprised the groom and all of our guests with a flash mob broadway singing performance during our wedding ceremony,” Quinn said in the video caption.

Per Yahoo, Quinn disguised “performers in the guest seats during the outdoor ceremony. While the bride and groom stood at the altar, singers began to emerge from different sections.” The fake guests sang “Can’t Take My Eyes Off Of You” by Frankie Vallie and the Four Seasons and “I Love You, Baby” by Frank Sinatra.

The definition of “flash mob” should be reworked here because it usually means many people participate. Quinn brought in just four singers, adding to the awkwardness.

Burrello looks shocked at the sudden turn, though it’s unclear if her shock is unexpected joy or horror. Many commenters thought the surprise was beautiful, but others wondered if the whole thing was too much.

“WHAT IN THE GLEE IS THIS,” joked @genfajardo.

“This is so awkward I’m crying but GORGEOUS WEDDING,” commented Mina Marlena (@minamarlenaa).

User @suzzzzyyyy wrote, “Idk I’d kill anyone that did this at my wedding.”

Probably the best answer comes from @m.ghiri: “Feel like this could’ve been done at the reception or not at all lol but good for y’all.”