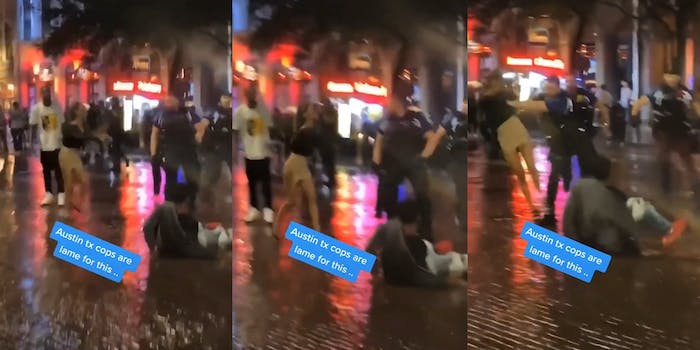 ‘Austin TX cops are lame for this’: Police shove woman to the ground on 6th Street in video

Some argued the woman who was shoved attempted to intervene.

A video shows police officers with the Austin Police Department pushing two people to the ground on 6th Street.

When the video begins, one officer shoves a woman, and she falls on her side. Police then tackle a man near her, and an officer gets the woman off the ground. Officers then seemingly hit the man they tackled in the face.

The TikTok was posted by John Gutierrez (@wurkitlikemexican) on May 3, and it was viewed almost 9 million times.

“Austin TX cops are lame for this,” Gutierrez wrote in the video’s caption.

A spokesperson for the Austin Police Department told the Daily Dot in a statement that it is aware of the video. “With any use of force incident, we will review it to determine compliance with policy and law,” the spokesperson said.

Some commenters on the video were wary of its authenticity, asking Gutierrez to post the entire video or show proof he took it himself. Others argued the woman who was shoved attempted to intervene in the police apprehending the man who was shoved in the video.

“You get involved in an active scene. You better be ready,” @dustinmtzmtz commented. “She didnt duck or move or anything.”

“She had no business getting involved,” @lloydthomas5 wrote. “She [could’ve] had a weapon.”

“Why would you approach a cop in the middle of a confrontation?” @thebelleoftwitch questioned.

Others seemed to agree by emphasizing that the woman should not have touched the police officer. It’s not clear in the video if she actually makes contact with the police officer before he shoves her. Some commenters also pointed to the man who had been tackled.

The Daily Dot reached out to Gutierrez via TikTok comment.