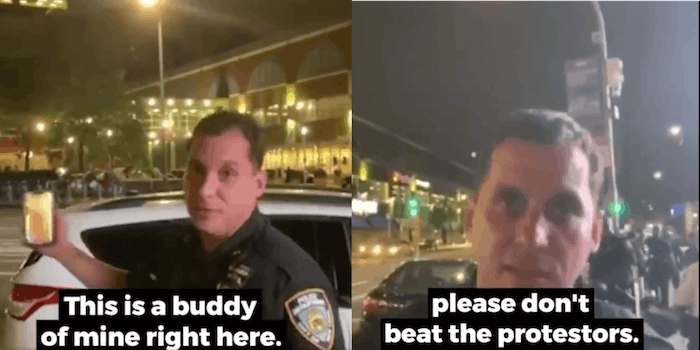 Cop FaceTimes his kid to talk to a protester—it backfires

'How do you feel about your dad going out every night to beat peaceful protesters?'

In a viral video, a police officer seems to instantly regret FaceTiming his child while on the job.

It’s unclear what sparked this interaction, but a New York City police officer gets his son on the phone to talk to what seems to be a protester. Based on the relatively quiet and clear streets, it doesn’t look like a protest is happening at that moment.

“This is a buddy of mine right here,” the New York police officer says to his child, pivoting the camera to a protester. “Say hi to my son,” the officer continues.

The officer’s son greets the protester with a “hello.”

“How do you feel about your dad going out every night to beat peaceful protesters?” the protester asks.

“Uhhhhh, I feel bad, and I want him to come home,” the child responds.

The officer, seemingly taken aback by the protester’s question, asks, “Don’t you feel bad that you’re questioning a young child?”

The protester tells the child that when his dad goes home he should ask him to “please don’t beat the protesters.”

The officer looks into the camera with a face of disbelief before the clip cuts out.

“Bodied in front of his child,” Twitter user @umbyrella captioned the viral video, which was originally posted on Instagram by the NYC Chapter of Democratic Socialists of America. So far it has 2.1 million views on Twitter and almost 200,000 likes.

Many of the comments under the video echoed a tweet by @BrookerTJustice, who said the cops are “now using children as human criticism shields… and it didn’t work.”

Others criticized the protester for calling out the officer in front of his son.

Twitter use @mwoonjae pointed out that the video shows kids are more aware than adults may give them credit for.

“The fact that the son isn’t even saying ‘my dad will never do that.’ But says ‘I feel bad and want him to come home’ come on you simpletons why can a child realize who’s in the right and who’s in the wrong. That poor child didn’t hesitate to believe his father is beating peaceful [protesters].”