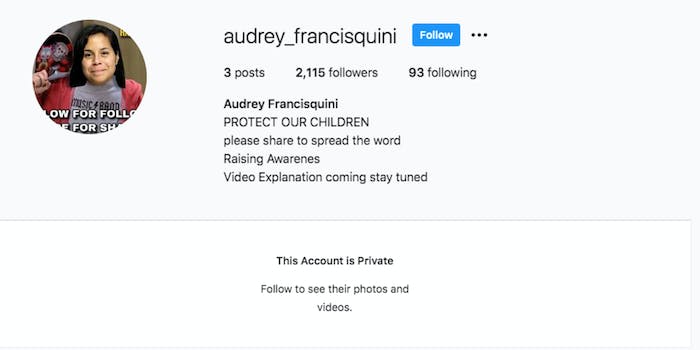 Audrey Nicole Francisquini attempted to blend in by 'holding a skateboard and carrying a painting.'

A former police officer was arrested in Florida after allegedly posing as a high school student to gain Instagram followers.

Audrey Nicole Francisquini, 28, was arrested on Monday and charged with “burglary, educational institution interference, and resisting an officer,” according to People, which reviewed court records related to the arrest.

Francisquini is accused of sneaking into a Florida high school, American Senior High School, and “blending in with students” on Monday morning, according to NBC News, which obtained an arrest report.

Miami-Dade police said, per People, that Francisquini attempted to dress like a student, “holding a skateboard and carrying a painting.” She reportedly handed out pamphlets to students that had her Instagram username on them and encouraged the students to follow her.

Francisquini reportedly roamed the halls during class hours, prompting school security to stop her. She reportedly told them that she was looking for the registration office. After she was caught roaming the halls for a second time, she allegedly ran from security. Police reportedly said that is when she was reported as a “potential threat on campus” by security.

Francisquini was eventually identified by police through the Instagram account she was trying to promote and arrested at her home.

People reported that Francisquini has since been released from jail.

A spokesperson for Miami-Dade County Public Schools called the incident “unfortunate” in a statement to NBC News.

Francisquini’s Instagram handle, according to Inside Edition, is audrey_francisquini. The account has over 2,000 followers and is private. The profile picture features Francisquini’s face superimposed on the “How Do You Do, Fellow Kids?” meme. The account promises that a “Video Explanation” is on its way and to “stay tuned”

The Washington Post reported that Francisquini was a police officer in DeKalb County, Georgia, up until 2017. She reportedly lost her job after she allegedly posted a fellow female officer’s nudes on social media.

The Daily Dot has reached out to audrey_francisquini, the Miami-Dade Police Department, and Miami-Dade County Public Schools.