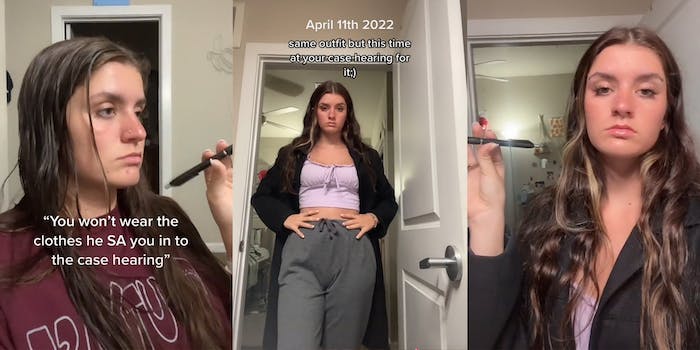 A sexual assault survivor wore the outfit she was allegedly assaulted in to the case hearing, starting an important conversation on TikTok

'I did the same and everyone thought I was crazy.'

In a viral TikTok video, a sexual assault survivor says she wore the same outfit she was assaulted in to the case hearing, starting a conversation about survivor empowerment in the comments.

According to the anti-sexual violence organization RAINN, an American is sexually assaulted every 68 seconds, while one in six American women have experienced a completed or attempted rape in their lives.

“What were you wearing?” is a common question asked of sexual assault survivors, and in many cases, plays a role in blaming the survivors for the crimes perpetrated against them.

However, user @leahfilmer decided to take a stand against victim-blaming and her abuser in court by wearing the same outfit she was sexually assaulted in.

“‘You won’t wear the clothes he (sexually assaulted) you in to the case hearing,’” the text overlay reads, before the video transitions to reveal her dressed in the sweatpants and tank top she was allegedly assaulted in.

Her video received over 2 million views and an outpouring of support from other users.

“I don’t know you but I’m proud of you babe,” one user said.

“This was beautiful and powerful thanks for sharing truly,” another said.

A few users noted the TikToker’s strength to be able to wear the clothes again, as they personally could not after their assaults.

“This is so strong and powerful. I couldn’t even look at those clothes for months after it happened,” one user said.

“I admire your strength. I had to throw them away and never look at them again,” another said.

Other users said they also wore the outfits they were sexually assaulted in to make a point in court.

“I did the same and everyone thought I was crazy. proud of u,” one user said.

“I did this! His face dropped when he saw me walk in,” another said.

However, several viewers warned against wearing the outfit so as to not hurt her case due to the expectation of professional court attire.

“Babe this is so powerful but trust me you want to show up to court in professional attire, it’s messed up but it will help your case,” one user said.

“It’s a fantastic message and we understand it but the judge may not. Confer with your lawyer don’t do anything that could work against you,” said another.

The Daily Dot reached out to user @leahfilmer via TikTok comment.