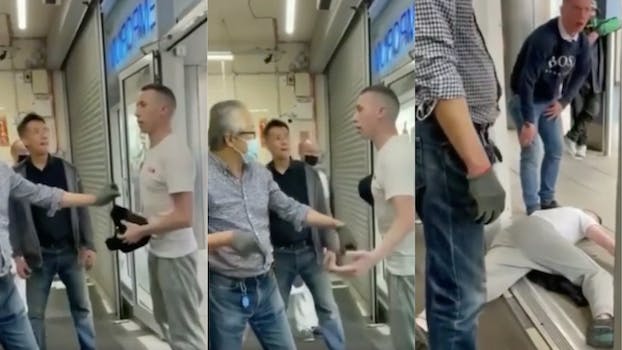 White man allegedly tries to harass Asian shop owner—gets knocked out by the senior citizen, ends up on ground

'Keep your distance,' he was warned.

A Reddit video shows an Irish man catching hands and getting knocked out after allegedly harassing an Asian man in Dublin.

The footage was also posted to Twitter by @davenewworld_2, and starts with a physical altercation in progress. Two Asian men are pushing back a white man as they yell at each other. It seems evident by the way they are fighting that the Asian men had been offended somehow, though what transpired is not exactly clear.

The apparent shop owner keeps on asking the man to leave, but he refuses. The two men eventually get the other man out the door, with the gloved Asian man asking him, “You want it?”

After a cut, the man comes back, and the gloved man warns him: “Keep your distance.”

The man doesn’t seem to get the message; instead, he continues coming forward, asking why they are being aggressive. But he apparently presses one time too many, with his hands up, because the gloved man throws a punch, knocking the man to the ground.

The video ends with everyone seemingly standing around, wondering what to do with his unconscious body.

While it’s difficult to ascertain exactly where this takes place, one commenter says they’ve been to the shop: “It’s right in the city center of Dublin, right next to the tram line. It has an interesting mix of people outside the door. Met the owner, the guy with grey hair in the video, a good few times and he’s an absolute gentleman. He always had my respect, but now that I’ve seen him knock a racist piece of shit out, he has my admiration.”