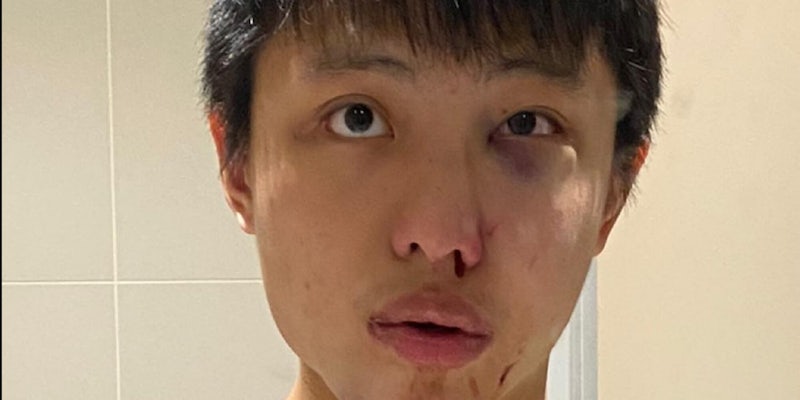 ‘I don’t want your coronavirus in my country’: Asian student shares story of racist attack

An Asian student named Jonathan Mok said he was the victim of a racist attack in London last week because of coronavirus.

In a post to Facebook on Monday, Mok shared the story of how a group of young men attacked him. Included in the post were images of his bruised and swollen face, as well as a call to “be the change” and to help stem the tide of intensifying racism caused by the fear of coronavirus.

According to his post, Mok has been a student in London for two years. While walking down Oxford Street late last month, Mok passed a group of young men. Upon seeing him, one of the men made a comment about coronavirus. Stunned, Mok turned to catch a glimpse of the man and things quickly spiraled.

“Within 3 seconds, he was in my face, together with 3/4 other young men, and a young lady,” Mok wrote. “All of a sudden, the first punch was swung at my face and took me by surprise. When I was still shocked by the first hit, the guy delivered the second sucker punch.”

At this point, people began to intervene. As they tried to talk the group down, one of the men told Mok, “I don’t want your coronavirus in my country,” before striking him in the nose.

The group was gone before police arrived. Mok, meanwhile, headed to the hospital. There, he was told he had “suffered a few fractures” to his face and may need “reconstructive surgery to fix some of the bones.” He is working with police to identify his attackers and bring them to justice.

In his post, Mok highlighted the everyday racism that has grown to troubling proportions in the wake of the virus. “To those people who told me that London isn’t racist, think again,” he wrote.

“Racists argue that people are a certain way because of their race. But how can this argument hold when we realize that race is such a malleable concept? I have believed for long that racism is grounded in stupidity, but I realize today that to say so, is not only being kind to racists, but also gives them an excuse. Racism is not stupidity—racism is hate. Racists constantly find excuses to expound their hatred—and in this current backdrop of the coronavirus, they’ve found yet another excuse.”

In the days following its appearance on Facebook, Mok’s post went viral. Since it was first shared Monday morning, the post has earned 65,000 reactions and has been shared 40,000 times. In several updates, Mok has called upon people to “work together to stamp out racism in this world and build a better future.”

Metropolitan Police told BuzzFeed News in a statement that it’s still working to identify the suspects using CCTV footage. Police described the incident as “racially aggravated assault.” Images of four suspects have been released to the public, but no arrests have been made.

Mok did not immediately respond to a Daily Dot request for comment.