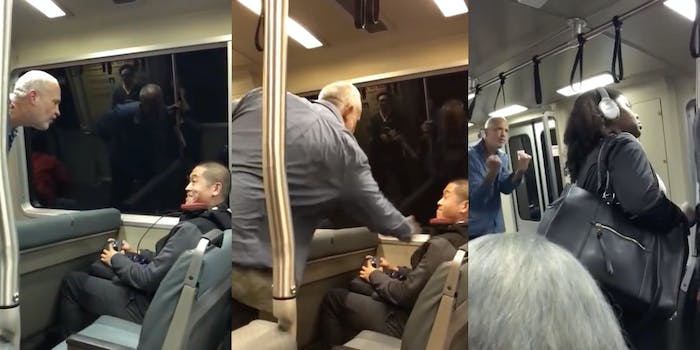 ‘I’ll put you down’: Asian man slapped on train by drunk racist in resurfaced viral video

In a viral racist attack, an Asian man was verbally and physically assaulted on a Bay Area train by a belligerent white man. But before you connect the dots to a recent nationwide surge in anti-Asian racism amid the COVID-19 pandemic, check the timestamp: The shocking incident took place in 2017 near Union City, California.

A video uploaded to Reddit’s r/PublicFreakout late Monday sees the altercation play out in just under 60 seconds. The drunken man is in the midst of antagonizing the Asian man when the video, which earned more than 1,000 upvotes overnight, begins.

In the video, the Asian man is seated near the window of a sparsely occupied train at the video’s start, looking up at the white man as he looms over him. He maintains a bemused smile as the white man tells him, “I’ll put you down in your seat.” The smile remains even after the drunken man takes a swing, smacking him with an open hand on the jaw.

The drunk briefly moves to walk away before turning back around and calling the Asian man a “Chinese [N-word].” He closely follows this with another swing, this time slapping the Asian man across the face as he continues to spout racist obscenities. This gets a reaction out of the other man, who finally takes the bait and stands.

As the Asian man shifts his items to the side, telling the drunken man to “put your hands on me one more time motherfucker,” the other train passengers finally respond to the brewing fight. The person filming urges the Asian man not to engage even as the drunk taunts him in the background. A Black woman puts herself between the two, quietly trying to calm the Asian man as the white man approaches once again.

Surrounding passengers provide their own advice, informing the Asian man that “He’s not worth it,” as the white man takes several swings from a distance and calls him a “Chinese fuck.”

The belligerent man is still attempting to goad the Asian man into a fight when the video ends. The drunk racist was later identified, according to the Mercury News, though his name was not made public. The Asian man declined to press charges and was praised by Bay Area Rapid Transit (BART) for his calm demeanor.

In the comments of the resurfaced clip, people found issue with the video’s title, which claimed the Asian man was “verbally assaulted” by the drunk.

Some people praised the Asian man’s restraint and applauded the other passengers for helping to de-escalate the situation. They noted the potential for nearby passengers to be injured if a fight had broken out.

Its newfound virality does resonate in 2021. The last year has seen a sharp rise in instances of racism and violence toward Asian people amid the COVID-19 pandemic and inflammatory, anti-Asian sentiment from the far-right.

In the Bay Area, Asian-targeted assaults are so common that activists have begun leading bystander training classes via Zoom.

This month, tensions boiled over California’s proposed Senate Bill 82. Under it, as KPIX notes, “robberies under $950 that don’t involve deadly weapons or result in serious injuries would be considered petty thefts.” Critics say this would, per KPIX, turn violent attacks against Asians into misdemeanors and lead to more of them.