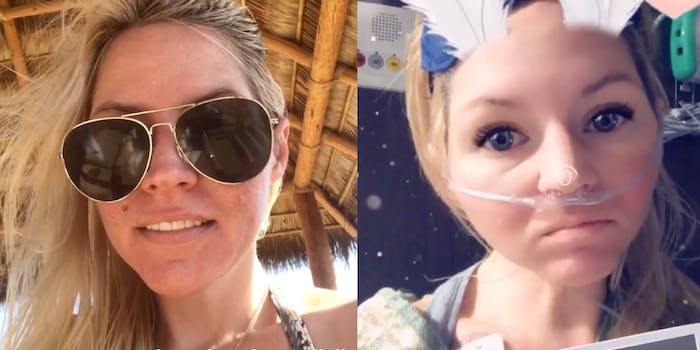 Ashley Mattingly was found dead in her Austin, Texas home.

Former Playboy Playmate Ashley Mattingly posted to Instagram days before she was found dead in her Austin, Texas home.

The 33-year-old died by suicide late last week after a public struggle with alcohol abuse. Just days before Mattingly was found, she posted to Instagram from what appeared to be a hospital bed. The brief upload explained that Mattingly was not ill, but had become “sick from alcohol.”

“I don’t have COVID-19, but I am sick from alcohol. Don’t drink alcohol. Don’t drink it. Leave it alone.” Mattingly said in the April 13 upload. The combination of a high-voiced filter and her quiet voice make much of the upload difficult to hear. The caption similarly warns people against alcohol. “I’m not quarantined I took bad advice and drank too much which I vometed [sic] a lot of blood,” she wrote. “Please slow down on the drinking ! U won’t be able to get into a hospital ! I’m lucky!”

Mattingly has been open about her struggle with alcohol abuse before. Previous posts to Instagram have claimed that “Ashley Mattingly is not going down as you’re (sic) drunk playboy playmate.”

She was also a victim of domestic violence. He ex, actor Lane Garrison, was convicted of domestic battery in 2012.

Mattingly’s sister Christy and twin brother Billy told People that her recent move from Los Angeles to Austin aimed to bring the family closer and help the young model get her life back in order. She was found in her Austin home after a friend requested a wellness check from the police.

Few details surrounding Mattingly’s death have been released by authorities. Several notes were reportedly found near her body. The Travis County Medical Examiner’s Office said toxicology reports could take up to three months.