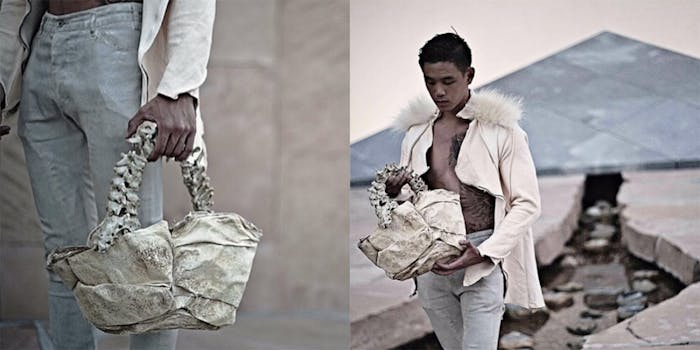 Designer faces backlash over handbag made of human child’s spine

A fashion designer from Indonesia claims he made a handbag out of a child’s spine and alligator tongues.

Arnold Putra originally posted the bag for sale on Instagram in 2016. A photo of the bag recently circulated on Twitter after user @wqbisabi shared a now-deleted tweet.

According to the caption on the original post, the bag is made of alligator tongues, and the handle is made of a “child’s spine who had osteoporosis.”

The Daily Dot could not reach Putra. He told Insider the spine was was “medically sourced from Canada with papers.”

According to Global News, buying and selling of human bones is legal in Canada.

After images of the bag resurfaced, Instagram accounts associated with Putra—@arnoldputra and @byarnoldputra, which Putra only contributes to—were flooded with negative comments.

“Defamation of the deceased child for profit,” one user wrote. “Rock bottom.”

“May God have mercy upon you,” another user wrote.

Putra eventually hid most comments on all of his posts, and according to Insider, briefly made his main account private.

According to Insider, two separate doctors confirmed the spine was real but could not determine whether or not it had come from a child.

The bag isn’t the only shocking item that appears on Putra’s accounts. In other posts, he claims to don jackets made of human skin, polar bear fur, and human rib bones.

Putra told Insider that the bag was from an unfinished collection “involving similar materials unprecedented in garment-making,” Putra said.

His non-design posts feature graphic images of men putting drills to their heads or Putra posing with corpses. There are also several shots of Putra with indigenous tribe members from all over the world.

In response to the backlash, Putra told Insider that he had no plans to change his creative process.

“I’m not intending to sell out and will continue to realize my ideas that are frequently changing in terms of subject matter,” Putra told Insider.