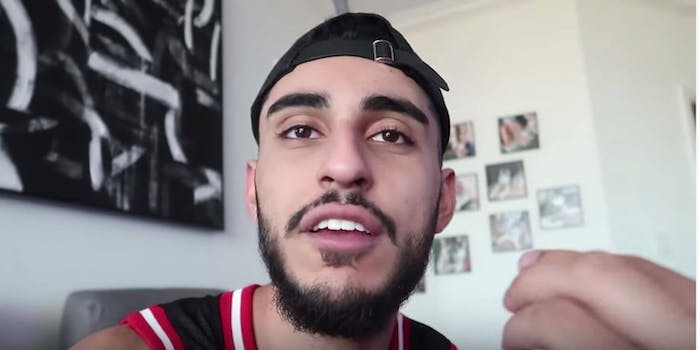 FaZe Rain is receiving an outpouring of support from fans.

YouTuber FaZe Rain, the most popular member of the FaZe Clan, has many concerned after he posted a series of suicidal tweets.

The series of tweets began on Saturday morning with a two-word statement written in all caps.

In the tweets that followed, the YouTuber who became popular for his Call of Duty gaming videos accused others of using him for profit and expressed suicidal ideations.

“When I tell people I don’t want to be alive anymore everyone and their mother just tells me the opposite. You SHOULD be here this that and the other. Well what if I don’t WANT to?” he tweeted.

“That’s my problem. I don’t need help, I’m not crazy I just bounce back and forth with wanting to die desperately and being ok with waiting until my time comes,” he continued.

FaZe Rain tried to convince fans that he has seen all there is to see already, despite only being 23 years old.

In another tweet, he explained that his life is filled with many positive things, like a loving relationship with his wife and parents, the “best dog,” and “some good friends,” but he still does not care to live.

Then he went on to blast unidentified people for using him.

“What did I get instead? Fake care. Fake love. From all of you fucking losers that just wanted shit out of me, opportunity out me, money out of me. Well guess what!!! you got it!!!” he tweeted.

He also explained that he is in debt by “hundreds of thousands” of dollars and hasn’t profited from the FaZe brand at all. “None of them give a fuck about me after everything I did for that brand and those people,” he wrote.

It appears that he is truly hurt by the lack of support he is receiving while dealing with mental health issues.

“Someone I knew went through something similar as me. When he needed me I was always there. Went out of my way to visit him and bring him stuff in a facility. Spent hours and hours talking with him. Now that I’ve needed the same help he’s been nowhere to be found,” he wrote, along with the hashtag #FaZeUp.

In the last tweet, FaZe Rain apologized for letting “every human I ever met down.”

“End of the day this is no ones fault but my own,” FaZe Rain wrote. “Goodfuckingbye.”

Fans were quick to express concern and support for the gamer and are urging him to get help.

“PLEASE get help dude. You mean the world to so many people. Nobody wants you to do this,” Twitter user @Racerize wrote.

breaks my heart seeing you like this, wish there was something we could do for you