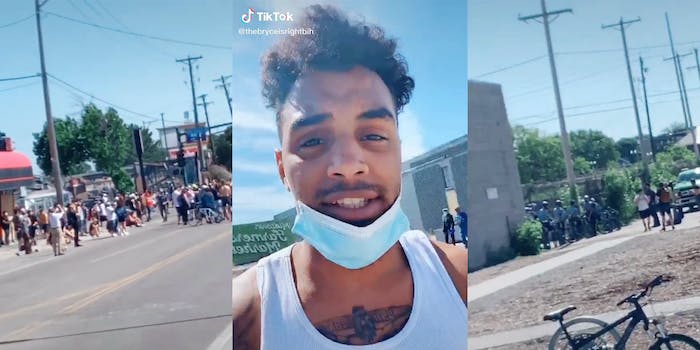 The judge said Bryce Williams is a 'good person who made a terrible mistake.'

The federal government charged Bryce Williams, a popular TikTok influencer and fervent protester following the death of George Floyd, in connection with the arson of the Minneapolis Police Department’s 3rd Precinct. Willaims was sentenced to 27 months in federal prison and ordered to pay a portion of a $12 million restitution, according to WCCO.

Williams frequently showed himself with others protesting and rioting on TikTok after former police officer Derek Chauvin killed Floyd in May 2020.

According to the StarTribune, Williams, a semi-pro basketball player, was one of the four men charged Monday with conspiracy to commit arson, per a press release from the U.S. Attorney’s Office for the District of Minnesota.

The 26-year-old was arrested on June 16 and made his first appearance on June 17 in federal court. Davon De-Andre Turner, Dylan Shakespeare Robinson, and Branden Michael Wolfe were also charged and sentenced.

The StarTribune repors that Judge Patrick Schiltz called Williams a “good person who made a terrible mistake.” Still, he said Williams was a “leader” of the group that set fire to the police station on May 28 amid protests that followed Floyd’s death.

As people tore down the fence around the police station, Williams reportedly threw a Molotov cocktail into the building. De-Andre Turner used the device to light a fire, and Williams added tinder to the flames.

While federal investigators located Williams through surveillance footage of the precinct arson, he had also essentially filmed and posted him in the act.