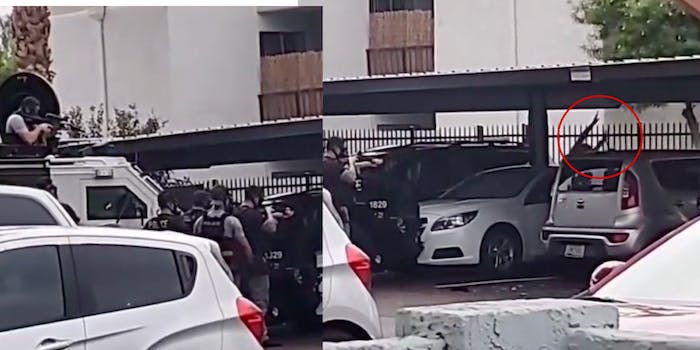 A video has emerged showing police officers shooting at a man who appeared to be following their orders in Tempe, Arizona.

The victim has been identified as 37-year-old Stephen Phil Franco and is seen in the video following the officers’ orders before he is shot. According to AZ Family, following the shooting, Franco was taken to a hospital where he died from his injuries.

TikToker Phil Martinez shared a video of the shooting on Saturday.

In the video, a group of at least five members of Mesa law enforcement, including SWAT, are seen surrounding a car in a parking lot. Two officers have rifles pointed in his direction as they ask Franco to open the door and step out of the car.

Franco emerges from the car with his hands up, in compliance with police direction, and there are verbal exchanges that are not audible in the video.

There are two shots, and Franco’s hands disappear momentarily from behind the cars. A police dog barks loudly trying to run toward Franco.

A few seconds later, Franco’s raised hands reappear behind the car, and the barking dog jumps toward him, seemingly making him move. The officers shoot at him again four times. They then move closer to him.

According to AZCentral, Mesa police were chasing Franco in connection to a robbery earlier in the week.

SWAT was called in after Franco reportedly did not comply with police commands to exit the vehicle, according to the report. Journalist Zach Crenshaw reported that the police said Franco was “non-compliant.”

Police said they later found a gun near him on the ground. Martinez said this is a “lie” in a follow-up TikTok video.

“That man did nothing wrong. This SWAT team has been known to do this,” he added. “There has been multiple times where they’ve shot people with rubber bullets while screaming ‘Keep your hands up’ and the moment they put their hands down, they take them out.”

The shooting itself is being investigated by the Tempe Police Department while Mesa officers are addressing the bank robbery, KNXV-TV reported. While there have been some claims on social media that the victim was Black, his race was not independently verifiable by the Daily Dot.

The Daily Dot has reached out to Tempe police and Martinez and will update the report if they respond.

Update 9:06pm CT, Oct. 6: This story has been updated with the Tempe police’s statement that officers fired beanbag rounds at Franco before and after he exited his vehicle, as well as clarification about where Franco died.