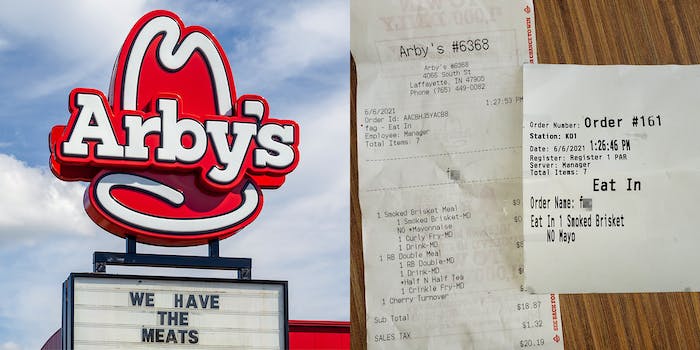 The worker responsible has reportedly been fired.

An Arby’s worker was reportedly fired after giving two gay male customers a receipt with a homophobic slur on it.

Per the receipt and wait ticket featured in a viral Facebook post, the incident happened on June 6 at an Arby’s in Lafayette, Indiana.

A gay couple reportedly had lunch together at an Arby’s on South Street in Lafayette. The couple saw the “order name” was a homophobic slur after the receipt was handed to them by an unnamed male employee, and they reportedly immediately called for a manager.

“I was shocked, just because the kid seemed like he was new on the job and he was really nice,” one of the customers, John Burns, told WLFI News 18. He and his partner, Craig Gray, who made the Facebook post, were the recipients of the receipt. The incident is particularly charged given June is Pride Month, meant to celebrate the LGBTQ+ community.

An Arby’s spokesperson stated to WLFI News 18 that the employee was fired and said the action was “unacceptable and not a part of the Arby’s brand.” Gray also stated in the comments section of the Facebook post that he and Burns witnessed the termination and that they were compensated for the meal.

In a video interview, Burns said he felt “obligated to speak up for people who can’t speak up.”

The Arby’s spokesperson confirmed to WLFI News 18 that there were attempts to reach out to both Burns and Gray to apologize for the employee’s actions.

The Daily Dot has reached out to Arby’s as well as John Burns and Craig Gray.