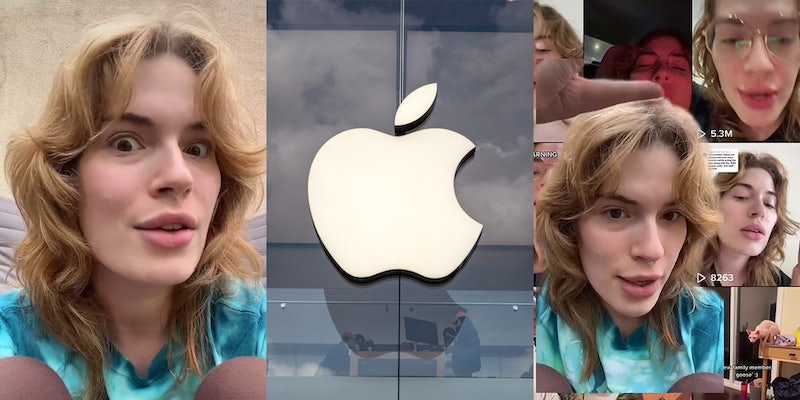 ‘That video did not make them look bad though…’: Apple worker asks the company not to fire her over viral TikTok video

'Maybe if you don't want my skills, maybe somebody else does.'

After sharing her knowledge of Apple products in response to an iPhone user receiving suspicious messages, one Apple employee is asking the company not to fire her.

TikTok user, comedian, and hardware engineer Paris Campbell (@stopitparis) posted a sort of follow-up video, stating that her employer was unhappy with her public identification as an Apple employee.

“I’m an Apple employee and this is a message for Apple,” she says in the video. “Right now I am patiently waiting to find out if I am getting fired for a video that I posted three days ago, the video in question being this one right here sitting at around 5 million views. It’s a video in which I respond to a woman named Stella who lost her iPhone.”

In a phone call interview with the Daily Dot, Campbell said that she is a single mother and recently lost her home in a fire, and is preparing to seek alternate employment if her appeal to the company is not heard. Before her first video caught the attention of her employer and her manager informed her that she may lose her job, Campbell said she had had an overwhelmingly positive experience with the company.

“I will definitely use any resources that I can to perhaps seek legal representation to try to appeal the decision through Apple,” she said. “If that’s not possible, possibly take this to court. I can’t say for certain at this point, but opportunities that come my way are going to be something that I’m looking for, and something that I’m very open to.”

Campbell clarified that the video she posted was made to assist someone and that the information shared is already available to the public.

“In this video nothing that I said was not already public-facing knowledge, I breached no form of confidentiality whatsoever,” she says in the follow-up. “All I did was make an incredibly accurate video which apparently resonated with millions of people. That’s not me just tooting my own horn, because apparently, Newsweek thought so too,” linking to the publication’s coverage of her advice.

She said that she has reviewed Apple’s social media policy, which does not bar employees from publicly identifying themselves as such, only from doing so in a manner that negatively reflects on the company.

“If you ask me, reinforcing the public’s confidence in Apple’s security is not something that makes the company look bad,” she adds in the video. “Especially when it reaches 5 million people in less than 24 hours. If we want to get technical, I’ve never identified myself as an Apple employee until this video. I’ve made tongue-in-cheek references, which made people wonder if I work for Blackberry, if I work for Apple, If I work for some third-party company altogether. But no, I work for Apple and I would very much like to stay working for Apple.”

In her six years as an Apple employee, Campbell describes her performance at work as “stellar” in the video.

“If I’m going to get fired anyway and I have your attention, I may as well try to use it to my advantage,” she says. “Apple, you didn’t hire me to make TikTok videos, but apparently I’m really good at it. Since posting that one video I have been asked to post many others on the topic and I’ve posted a few that have done very well. Talking about your products and tech in general and how people can deal with it in their everyday lives is kind of the thing that I’m best at, and you guys know that because you kinda hired me to do that.”

In her interview, she said any prospective employer who may be interested in her experience as a technician should know that she is an extremely hardworking individual, dedicated and passionate when it comes to her work. Long before she began working for the company professionally, Campbell said she was inspired to build her technical knowledge by taking some of her own Apple devices apart, to learn how they functioned.

“I admired the company for years before I even started working for them,” she said. “I was kind of your classic Apple fan-girl teenager. I would take apart the devices as a kid to look at how they worked. My initial tech knowledge was all very self-taught and all very motivated by Apple’s culture.”

Ultimately, she asks the intended viewer, Apple, to consider the opportunity to retain her ability to teach others about their products by choosing not to fire her.

“This is me going over my manager’s head, doing the thing that probably will get me fired,” she says. “But there was a time when Apple used to respect when people did things that were really wacky and out-of-the-box. This is definitely wacky and out-of-the-box. I don’t know Apple, all I’m saying is maybe I’m in the wrong position with you. Maybe if you don’t want my skills, maybe somebody else does.”

The Daily Dot has reached out Apple directly via email regarding the video.