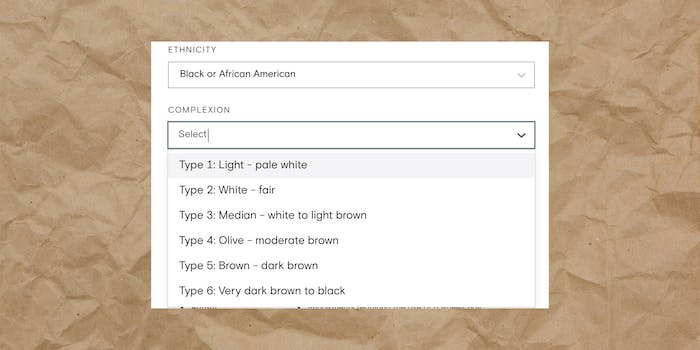 The machine intelligence company has come under fire.

An Artificial Intelligence (AI) company has come under fire after a job applicant tweeted a screenshot showing she was asked to list the tone of her complexion while applying.

Charné Graham, a digital marketing and social media marketing specialist, tells the Daily Dot she lost her job last March due to the pandemic. She has been looking for work since and was recently contacted by a recruiter via LinkedIn and asked to apply for a part-time “social media evaluators” position at Appen, a machine intelligence company in Australia.

She wanted to learn more and came upon the FAQ page of the company, which asked her to go ahead with an application.

As she was filling out the form and came to the section about demographics, she was asked to list her skin tone, she says.

According to the screenshot she shared in the tweet, the options ranged from “Type 1: Light – pale white” to “Type 3: Medium – white to light brown” to “Type 6: Very dark brown to black” and so on.

After seeing some responses, Graham said she understands that as an AI firm, there’s a requirement for having data on different skin tones, given the AI’s history of mixing up Black people that has resulted in many racial profiling cases.

However, Graham says, she has concerns about the fact that it was placed in the demographic section of the application, and right under “ethnicity.” This may give some users the impression that the skin tone is an important part of understanding the demographic of an employee rather than a requirement for research purposes.

She also says they should have made it clear and attached a disclaimer with that question explaining why such information was required for someone to just apply for a job.

As someone who has filled out her share of questionnaires on demographics during a job application, she said she found this particularly “puzzling.”

“I get that they want to implement D&I [practices], and it reflects that on the website—with lots of pictures of diversity,” she said, adding that she also wasn’t clear about race relations in Australia and wasn’t sure what to make of it.

After reading on job review site Glassdoor about ageism at the company, Graham said she is no longer interested in working with Appen.

The Daily Dot has reached out to Appen.