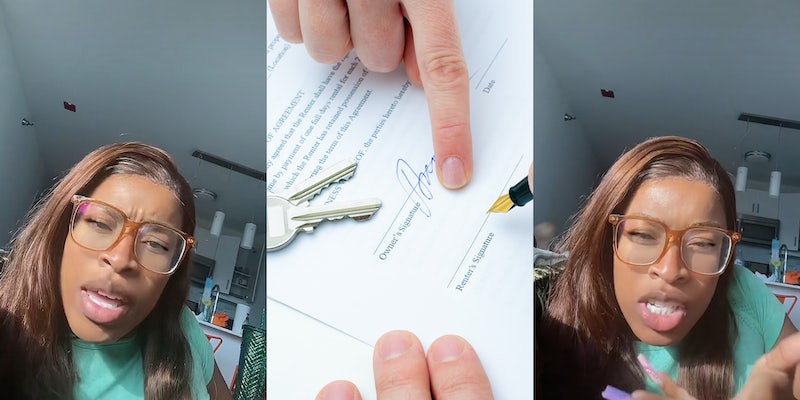 ‘So they can blame you for damages’: TikToker says building wouldn’t give her keys without signing inspection—she hadn’t even seen the apartment

'Why would I sign that if I haven't inspected the unit?'

A TikToker recently went viral after sharing a story about signing her apartment lease, in which the building’s management would not give her the keys before she signed the inspection form.

According to TikTok user Jill (@killjill___), she was in the process of signing all her required documentation for the apartment when the landlord asked that she sign an additional form before receiving her keys.

That form was a document claiming that the TikToker had inspected the apartment and approved of it, which was not true.

“These apartment buildings be thinking they slick, and they not,” Jill says in the video.

Jill’s video recounting this experience currently has over 283,000 views.

Immediately upon learning the contents of the document, she resisted the landlord’s push to sign.

“Why would I sign that if I haven’t inspected the unit?” she asks. “That doesn’t make sense to sign a form that says everything looks all good when I don’t even know if it looks all good.”

This is the second time Jill says this has happened to her, she adds later in the video.

In comments, users speculated as to why a landlord would try to make their renters sign such forms.

“They’re trying to get you to sign for that apt “as is” so any complaints gets flushed and so they can blame you for damages…” one user guessed.

“And so when you move out they can blame all the damages that were already there on you,” another echoed.

Others offered similar stories from their own rental experiences.

“My last apartment tried so hard to talk me out of viewing the unit,” a user claimed. “Then suspiciously had to show and put me in a different unit.”

“My complex did the exact samething! ! ! But i didn’t sign mine either, and i had to raise hell!” a second alleged. “It’s sad how they try to cut corners &get over on ppl.”

“I made that mistake and the apt ended up having roaches,” a third wrote.

Users also stressed the importance of actually seeing and inspecting an apartment before renting.

As one user wrote, “​​for friendly reminders now never sign a thing unless you or someone you know has been to the apartment.”

We’ve reached out to @killjill___ via email.