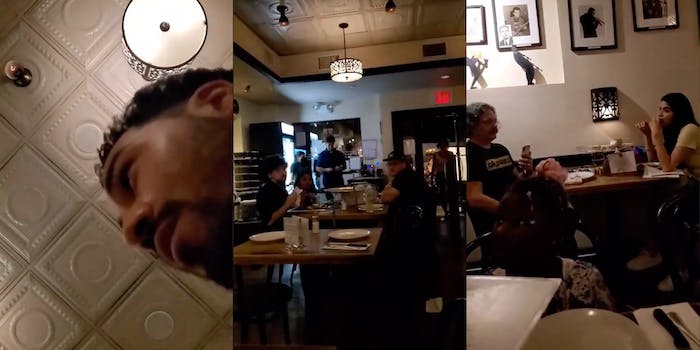 ‘This is the America you want to live in?’: Anti-vaxxer rants over pizzeria’s vaccine mandate in viral video

Video footage reposted to Twitter shows a man harassing restaurant staff and customers after he was asked to show his vaccine card at a Brooklyn pizzeria. He also is heard comparing vaccine mandates to segregation.

The footage, filmed by the anti-vax man, shows who appears to be the restaurant manager attempting to convince the man to show his vaccine card so he wouldn’t be kicked out.

“So you’re going to enforce segregation?” the man asked. The man then claimed he had a religious exemption from any vaccine mandate.

He refused to leave, telling the manager he could leave instead. After the manager walked away, the man turned to address other restaurant-goers and staffers.

One of the other restaurant customers replied, “Yup” and flipped a middle finger at the man. So the man told the customer, “You’re not American” and to “get the fuck outta here.”

The man continued yelling and asking bystanders if they wanted to live in a country that allowed restaurant managers to ask customers for vaccine cards.

The man claimed a poster from the city outside of the restaurant stated vaccine discrimination wasn’t allowed, but New York requires proof of at least one COVID-19 vaccine dose in order to dine indoors, according to the New York City website.

The pizzeria, Julianna’s Pizza, responded to the incident in a tweet. “We take the health and safety of our customers seriously,” it read. “We also face steep fines if we violate City Hall’s order. We are permitted to and do accommodate unvaccinated individuals for outdoor, socially distanced dining & takeout. We appreciate your understanding & support.”