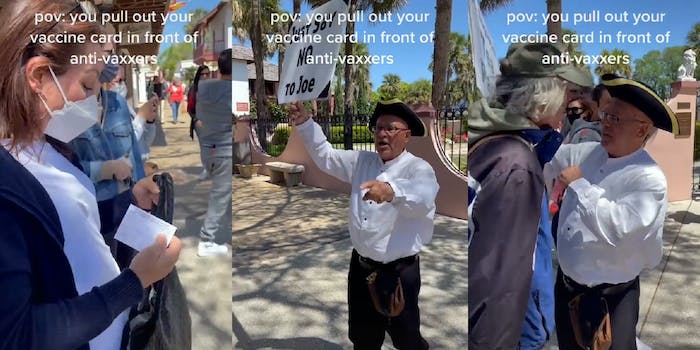 ‘You injected murder babies in your veins’: Anti-vax ‘town crier’ dresses up to yell conspiracy theories

He's a member of the St. Augustine Tea Party.

An anti-vax Tea Party member in Florida wearing 18th-century American colonist clothing told a woman who received the coronavirus vaccine that she “injected murder babies” into her arm.

TikToker @talatheballa video filmed and posted a video of her mother apparently pulling out her vaccination card, setting off the Florida man. The overlay text says, “POV: you pull out your vaccine card in front of anti-vaxxers.”

While holding a sign that reads “Just say no to Joe,” the anti-vaxxer yells, “You injected murder babies in your veins!”

The mom and daughter sarcastically laugh and applaud the man.

The anti-vaxxer then cites a version of Matthew 18:6, which actually goes: “But whoso shall cause one of these little ones who believe in Me to fall, it were better for him that a millstone were hung about his neck, and that he were drowned in the depth of the sea.”

Later in the video, another man closely approaches the anti-vaxxer. The self-identified patriot fends him off, telling him to get out of his face.

In a subsequent video, @talatheballa explains she and her mom were walking around in St. Augustine, Florida, and the anti-vaxxer was a member of the St. Augustine Tea Party.

She includes a few short clips of the pro-Trump, anti-vax, anti-masking group hanging out and spewing conspiracy theories at passerby.

According to its website, the group is called the St. Augustine Tea Party’s Town Criers and on Saturday “took to the streets to engage the ‘Snow Birds’ who had [descended] on the Historic District of the Nation’s Oldest City.”

The site also claims that “the crowd this Easter and Spring Break season was the greatest in number in the ten years of their experience.”