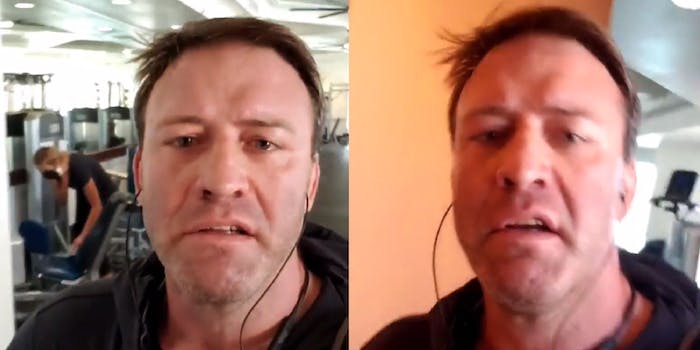 ‘I’m doing you a favor by even playing pretend’: Former UFC pro kicked out of gym over mask protocol

Former UFC fighter-turned-pro wrestler Stephan Bonnar is big mad over being “kicked out” of a local gym for not wearing his mask correctly.

Bonnar, known as the “American Psycho,” filmed himself on his 44th birthday, irate that he was asked to leave. “One of these sheep complained that my mask was dropping,” Bonnar says.

He says he’s been going to that gym for 14 years.

“Well guess what, sheep?” Bonnar says. “I have a medical exemption. I have asthma. I’m doing you a favor by even playing pretend. Masks don’t do anything. Wake up, you sheep. Tattle-tales! Cowards!”

In his caption on Instagram, Bonnar wrote that on his 10th birthday, he was “thrown out of the playhouse … for being too tall.”

“Here I am 34 years later getting thrown out of the gym for exercising my right to breathe clean air,” he wrote.

Now an active professional wrestler in a small Nevada-based organization, Bonnar is most famously known for his legendary fight in The Ultimate Fighter 1 finale. He lost against future light heavyweight champion Forrest Griffin.

Bonnar is also a vocal right-winger who called the shutdown of the Parler app “commie BS.”