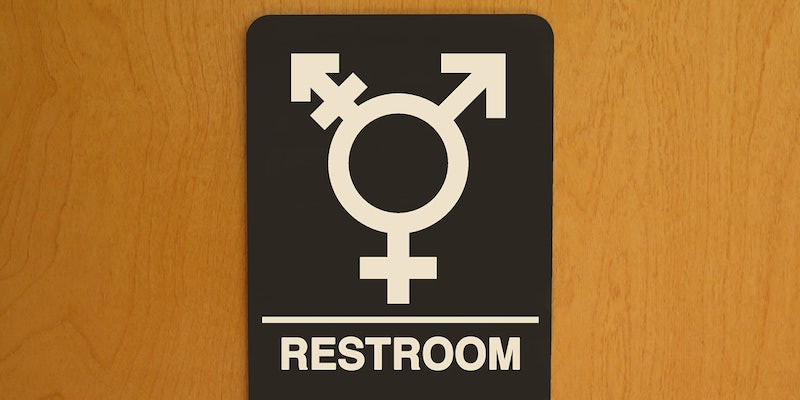 I am proof that anti-trans messaging can have real, disturbing consequences

Even if Trump's proposals don't happen, the damage has already been done.

“You know this is the women’s bathroom, right?”

My stomach dropped. “Yeah, I know,” I responded, turning to the woman questioning me. She looked to be in her upper 50s, blonde with blonder highlights, and wrapped in a puffy pink winter vest. We were both wearing scarves for the same soccer team, a team that displays a giant rainbow banner with the words “All fans welcome” at every game, including this one we were both attending.

I watched as she appeared to pretend-play on her phone, repositioning it, always with the camera facing toward me. I don’t know if she took a photo; I was too shaken to speak. She then shook her head and walked out. I tried to steady my breathing as I returned to my partner and friends. My favorite thing about this soccer team is how inclusive they are, but in a single moment, any feelings of belonging and safety I had were shattered.

I am non-binary. I don’t even want to use the women’s bathroom, but I do (when there aren’t gender-neutral bathrooms) because of how I’m usually perceived.

The same day I had this experience, the New York Times revealed that the Trump administration is considering policy changes that would make it so people will not be able to legally change their gender. Under this policy, gender would be permanently determined by the genitals a person is born with. The policy memo reportedly says this is a definition that is “grounded in science,” despite the many intersex people who live in the United States and the already scientifically recognized complexity of sex and gender.

If this policy change goes through, there will be no protection against anti-trans discrimination, including in public schools and public spaces like the bathroom I was in Sunday. I’m not sure if the woman in the pink vest read the Times piece and then felt inspired or emboldened to question me hours later. But it does not take written laws to turn people against a marginalized population. In fact, even if Trump’s proposal doesn’t become law, simply having these policy discussions creates an environment of fear and dehumanization.

It galvanizes people to harass and attack people they perceive as trans or gender non-conforming. It encourages people to police those who don’t conform to gender stereotypes. It throws life plans for trans people into uncertainty, not knowing whether they can safely go out in public anymore. That fear extends to people who haven’t come out, who now may be too afraid to live their lives as who they truly are. When governments “discuss” stripping civil rights for any marginalized group, the message to them is clear: “We will not protect you.”

This implication, that trans folks are lesser than, only makes it easier for people to justify violence against them. Anti-LGBTQ murders rose by more than 80 percent in 2017, the year Trump took office and debates about bathroom bills were had across the country. This kind of policy even being considered at the national level could have serious consequences for the safety of the LGBTQ community.

When news of the proposed policy came out on Sunday, I watched and listened as grief, anger, and fear swept through my trans friends online. I saw folks offering help with moving to more trans-friendly areas. I read reminders that we should all be taking self-defense classes. I saw and wrote wishes of love and comfort. But what I witnessed the most was fear and exhaustion. People are so tired of having to fight to live.

That morning as I read the news, I bitterly thought that it was finally convenient that I don’t “look non-binary.” In the evening, it was made clear that sometimes I look just non-binary enough for it to be a problem. I don’t know what about my appearance set off the woman’s gender alarms, but I know as long as the government is considering taking away trans rights, I’ll be wondering what she saw every time I go to the bathroom.