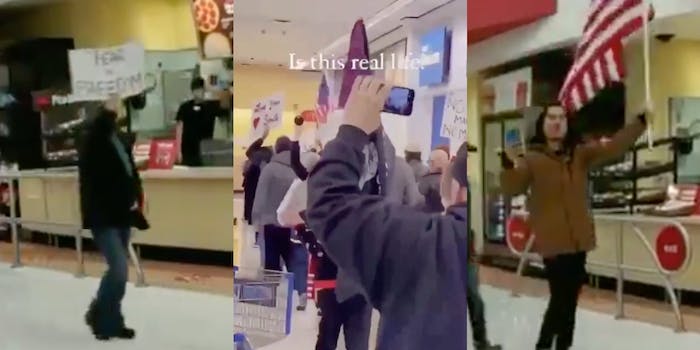 'Is this real life?'

Two videos, one apparently taken in a Phoenix-area Target and the other in a Wal-Mart, show unmasked protesters carrying flags, holding anti-mask signs, and chanting anti-mask and pro-America in each store. A similar protest took place at a Florida Target store in September.

Twitter user @davenewworld_2 posted the clips on Friday. The caption “Is this real life?” is attached to the Walmart video.

The videos of the protests surfaced amid an upsurge in COVID-19 cases and deaths in Arizona. According to KTAR-FM, the state reported more than 7,600 new coronavirus cases and 142 deaths on Friday.

According to the Arizona Department of Health Services, the state’s totals on Friday were 442,671 COVID-19 infections and 7,819 deaths. Phoenix has particularly been a problem spot concerning enforcement of mask-wearing.

Per an AZFamily.com report, Rep. Andy Biggs (R-Ariz.), tweeted to suggest that masks did not work.

“Maricopa County is proof that mask mandates fail to slow the spread,” he wrote Monday. Biggs listed unverified data of deaths and cases since the county imposed a mask requirement over the summer.

The information was quickly debunked with a reply showing the effects of the mask mandate.

But the attitudes of Biggs, conservative Arizona politicians, and outgoing President Donald Trump have fueled the anti-mask energy displayed in the viral videos of anti-mask marchers.

In response to the clips, user @TheBasementPro3 shared a satirical comic by @adamtots and tweeted, “Unfortunately, the stupidity, ignorance and selfishness displayed by ‘anti-maskers’ know no reasonable limits! Some people learned absolutely nothing with this pandemic and so many lives lost.”