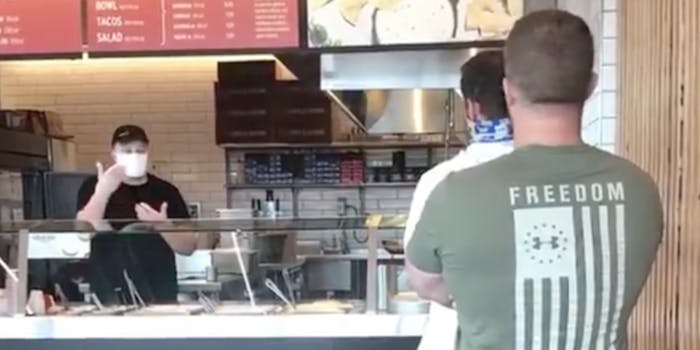 The man threatened to return to the store with a 'group of vets.'

An anti-mask protester has gone viral after being filmed threatening Chipotle with a lawsuit for being refused service.

Video of the incident, which was first uploaded to TikTok, shows a man in a “freedom” shirt refusing an employee’s request to wear a mask.

The man can be heard repeatedly shouting “not interested,” as the employee behind the counter attempts to get him to comply with the store’s policy.

The unidentified man also alleges to have a “medical condition” that keeps him from being able to cover his face, a popular claim among anti-mask conspiracy theorists.

Despite making a scene, the employee kindly offers to take the man’s order outside.

“I want to be served like a normal human being,” the man says.

The man eventually threatens the store with a lawsuit, noting that he has previously been denied service at the store as well.

“I have been here three times—call your manager, ask him about the guy who comes in, demanding to be served,” he says. “He’ll know exactly what you’re talking about.”

The employee then informs the man that the police will have to be called if he refuses to leave.

While it’s unclear what happened next, the TikTok user who first posted the video claims the incident continued.

“Not much happened after,” they wrote. “The employee went to the back to call the police. Karen went quiet until he stepped to the front.”

After reaching the front of the line, the man was refused service yet again.

The man responded by threatening to come back tomorrow with “a group of vets” before eventually leaving.

The video so far has been seen more than 800,000 times on Twitter alone. The incident is just one of many in which anti-maskers have been seen in public throwing fits.