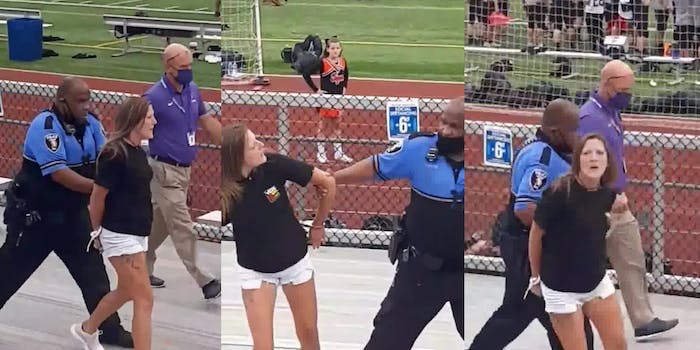 ‘I ain’t doing nothing wrong.’

A video posted to Reddit shows a police officer using a stun gun to immobilize a woman who refused to comply with Ohio mask mandates during a middle school football game.

The 2-minute clip, which garnered more than 800 comments, shows an unmasked woman resisting arrest. After more than a minute of struggle, the police officer shocks the woman with the stun gun and escorts her from the bleachers.

According to a report by the Marietta Times, the woman, who has been identified as Alecia Kitts, is a parent of a football player in Ohio’s Logan-Hocking School District. She was cheering on her son when the police officer and junior high school Assistant Principal Adam Twiss approached her and asked her to put on her mask. When she refused, the officer attempted to detain her.

“You’re not arresting me for nothing, I ain’t doing nothing wrong,” Kitts yells as the officer tries to handcuff her. “You get a warning and then a $500 fine. You don’t get arrested,” the person filming can be heard saying. The camera focuses on the field to show the football game score, but the sound of a stun gun brings the camera back to the scene.

“Oh, my God, he just tased her,” the person filming yells. Kitts falls to a lower tier of the bleachers and is put into handcuffs and walked off the stands.

“All because this lady didn’t have a mask, and she didn’t want to leave because she’s watching her kid play football. That’s unreal,” the person filming says. But the video shows that the woman did appear to have a mask in her back pocket. Why she refused to follow state ordinances is unclear.

According to the Marietta Times, the venue hosted 300 fans for Wednesday’s game, and only Kitts and her mother refused to comply. “This rule has been in effect since we were told we could play,” Logan Athletic Director Theresa Schultheiss told the paper. “Everyone that came through ticketing tonight was reminded, we had regular announcements over the PA reminding you that mouths and noses needed to be covered and we had signs at the bathrooms.”

The Logan Police Department said on Wednesday that the incident is under investigation.