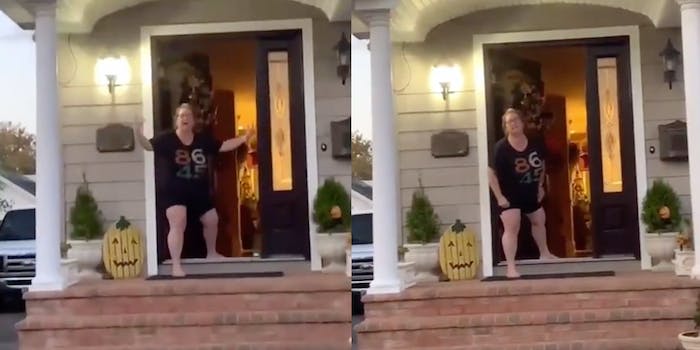 We’ve seen anti-Karens before, a label typically assigned to people who stand up to the entitled, demanding women that earn themselves the moniker of Karen.

A recent video may top them all, however, as a proud anti-Karen defends Black Lives Matter and LGBTQ+ rights in a fiery rant that is the antithesis of Karen ideals.

The video was captured via TikTok earlier this week and later shared to the r/PublicFreakout subreddit. There, it has collected more than 47,000 upvotes for its stunning takedown of several common Karen talking points. It’s only 15 seconds long, but the aggressive, wholesome message our anti-Karen touts is well worth a rewatch. Or three.

At several points during the rant, she throws her arms in the air like she’s goading someone into a fight.

“Women’s rights are human rights. And the virus is not a hoax,” anti-Karen yells. She finishes it off with a final, belted “coronavirus” that channels stunning Cardi B energy.

We now face a new dilemma. What do we name these heroic anti-Karens? Reddit decided months ago that true anti-Karens—those timid, quiet, laidback types—should be referred to as either Peggy or Sharon. But what of the equally loud, distinctly non-entitled anti-Karens? They deserve a title all their own.