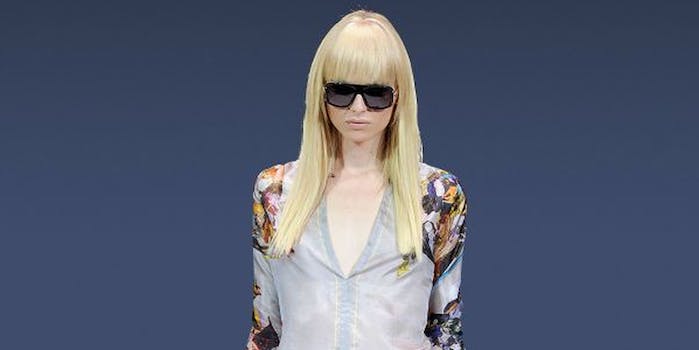 The supermodel held nothing back at her stunning London Fashion Week appearance.

Last year, after years of rocking the androgynous look for both male and female designers on runways around the world, supermodel Andreja Peji? finally opted to undergo gender-reassignment surgery.

On Monday at London Fashion Week, Peji? made her debut appearance as a woman, walking the runway for British designer Giles’s fall show.

The incredible beauty look at #Giles yesterday by the master @lucia_pieroni hair by @sydhayeshair Got to love a good dark lip! Definitely becoming a big trend.

Peji? was a controversial figure in the fashion world well before she transitioned. Known as an “androgynous” model, she was one of a handful of openly genderqueer runway models, walking the aisle as a bride and as a male model for Jean Paul Gaultier in 2011.

That same year, several bookstores deemed a magazine cover featuring her topless too risqué to openly display in stores. A few weeks later, in a roundup of the 100 sexiest models in the world, the magazine FHM described Peji? using severely transphobic language. It quickly retracted the entry and posted an apology.

In 2012, Peji? decided to put her career on hold to formally transition. As she told Style magazine shortly after her reassignment last year, it was a move she’d been wanting to make for years.

“It makes me feel freer than ever,” she said, speaking of her reassignment. “Now I can stand naked in front of a mirror and really enjoy my reflection.”

Peji? also noted that the “trend” of androgyny in fashion has yet to die out. She speculated this was because androgyny isn’t a “trend” at all, but a step toward much-needed representation:

Everyone was kind of saying, “Oh, it’s just a trend, it’s going to go away,” and it hasn’t. I think that’s because it represents a social layer of people who feel that they don’t want to conform to traditional forms of gender—who feel traditional forms of gender are outdated. That social base feeds the trend, and it feeds the exploration in fashion.

Peji?’s fans were overjoyed at her Fashion Week appearance. “SO GLAD YOURE BACK ON THE RUNWAY!” wrote one fan on Instagram.

There’s no word on whether Peji? will continue to model both female and male designs, but clearly the runway is secondary to Peji?’s real Fashion Week victory: wearing the hell out of those beautiful clothes.