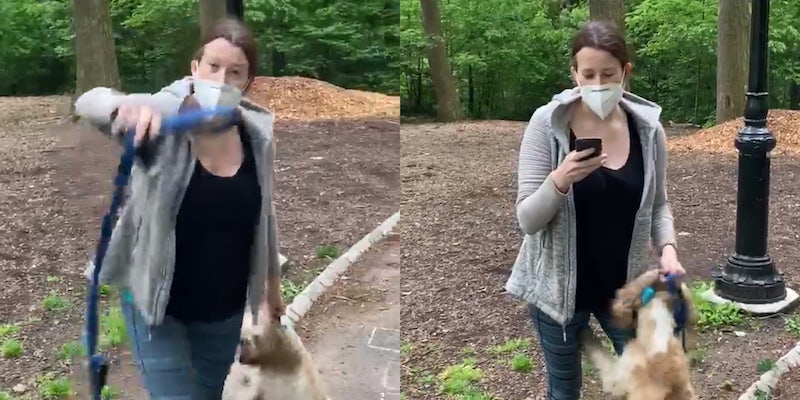 Amy Cooper, the so-called Karen who dialed 911 over an infamous confrontation about her unleashed dog with Christian Cooper, a Black man, in Central Park last year, is suing her ex-employer for alleged racial and gender discrimination. Now, some on Twitter say she’s also using a burner account to vilify Christian Cooper and defend herself.

Amy Cooper filed her discrimination suit against investment firm Franklin Templeton in New York federal court on Tuesday, per ABC News, “exactly a year after Amy Cooper was caught on cellphone video in a verbal dispute with birdwatcher Christian Cooper, during which she falsely claimed to police that an ‘African American man’ was threatening her and her dog.”

The latter Cooper recorded much of the encounter, which showed Amy Cooper to be deceitful in her call to the police and wound up getting her fired from her job.

“Even a perfunctory investigation would have shown that Plaintiff did not shout at Christian Cooper or call the police from Central Park on May 25, 2020, because she was a racist — she did these things because she was alone in the park and frightened to death after being selected as the next target of Christian Cooper, an overzealous birdwatcher engaged in Central Park’s ongoing feud between birdwatchers and dog owners,” the complaint asserted.

On Wednesday, @chris_notcapn tweeted about a now-frozen account, @lily123_tiger, which is allegedly an Amy Cooper burner: “So suddenly this account popped up now that Amy Cooper is suing her former employer. It is literally spending all day every day defending Amy and trashing Christian — including spreading lies that he’s a serial predator.”

@chris_notcapn’s tweet has received 1,300 likes and more than 100 replies.

The Twitter whistleblower also linked a document that detailed Christian Cooper as the “serial predator” and found that he’s not mentioned in any part of the document.

Other clues raised questions about @Lily123_tiger being an Amy Cooper burner. For one, the replies have slipped into the first person occasionally, with sentences like “All you have done is defame me.”

Cooper claims in her lawsuit that Franklin Templeton’s move to downsize her caused “severe emotional distress,” leading to suicidal thoughts.

She further alleges the company would have taken a different action if she wasn’t a white woman, saying the company “perpetuated and legitimized the story of ‘Karen’ vs. an innocent African American to its perceived advantage, with reckless disregard for the destruction of Plaintiff’s life in the process.”