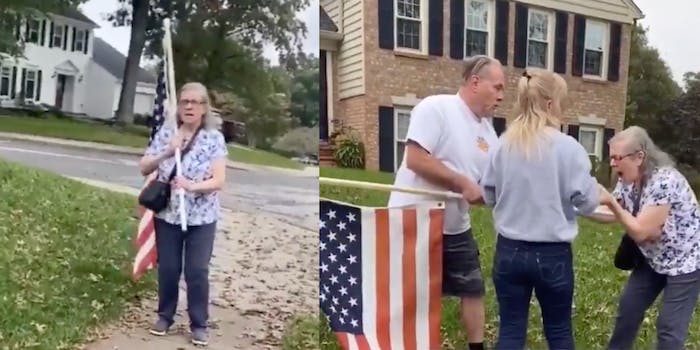 A TikTok user dubbed a woman a “Grandma Karen” after she swung a massive American flag at people and attempted to bite his mother’s hand.

A video posted on TikTok by user @blake_355 on Monday shows a woman rounds a street corner with the flag, swings it toward a teen on the sidewalk, and narrowly misses his face.

The person recording the video is standing on a sidewalk but appears to inch backward as the woman comes closer to his friend. “I’m a fire marshall,” a man says from the yard of a nearby house. The woman then swings the flag toward the man.

“Oh no honey, everyone’s here to help you,” says a woman who is not visible in the video. The man who identifies himself as a fire marshall tries to take the flag from the woman, but she holds onto it really tight, resulting in a tug of war.

“Please let go, you don’t need to fight,” the man says. “I’m trying to help you.” The woman continues to resist and points her finger toward the man’s eye as though to poke him.

In a second video, the tug of war continues as the older woman yells “no!” and tries to bite the hand of a woman whom the TikToker identifies as his mother.

The video then cuts to show two police officers placing the older woman in handcuffs and telling her she’s being detained. The officers then put the woman into the back of a police car as she says she “will not go.”

A handful of people identifying themselves as healthcare workers commented on the TikTok videos and said her behavior was consistent with someone with someone who has dementia and Alzheimer’s.

“Noooo, she doesn’t need to be detained,” wrote one user, “this is what needs to change…she needs help.”

Others commented on the nature of the detention: Police escorted the woman calmly and without any violence, a privilege that people of color—especially Black people—are seldom given.