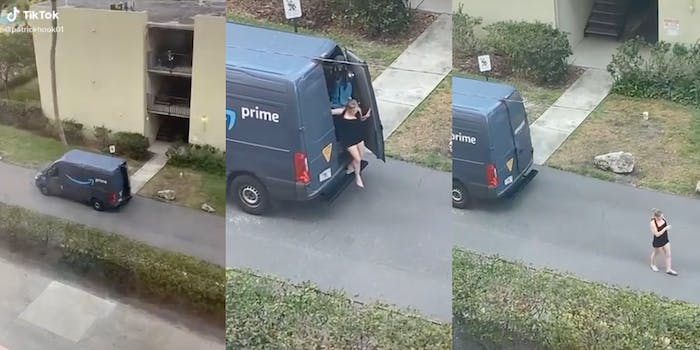 The video is from 2019, but the driver recently got fired after it went viral.

The Amazon worker who went viral in October after a woman was filmed leaving the back of his truck said the attention the video received got him fired.

In a video interview with TMZ, the worker clarified that the woman was his partner. When asked what went down in the minutes before the video started recording, the former Amazon employee said he was “just doing his job.”

The TikTok became a viral sensation because of the speculation and resulting innuendos about what exactly the pair were doing in the truck. To date, the video has been viewed more than 11.6 million times on the video-sharing platform.

“It was just a one time incident, but I did what any other man in America would do,” he said.

The man said aside from the video’s public disturbance, there were no packages reported missing, and nothing was reported stolen.

Commenters who’d originally expressed worry about the driver’s job being at risk ended up being right.

“Uploader gets a few likes,” one commenter wrote on the clip. “The public blows this out of proportion. The poor fellow gets shamed and cannot support his family anymore. Social media!”

“You can’t get away with anything in this century with all the technology lmao,” another viewer said at the time. “Dude is definitely getting questioned or getting fired.”

The former delivery believes the virality of the video is what got him fired, telling TMZ: “It was just the incident went viral, that’s what cost me my job.”

While the consequences came in 2021, the actual video was reportedly originally filmed in July of 2019 in a Florida neighborhood.

It shows a blonde woman wearing a black dress stepping out of the back of the delivery truck. She appears to grab her phone—which was tucked in the top of her shirt—and makes a call as she walks away.

Joking comments on the viral video include:

“So Amazon drivers are the new milk men,” one commenter said.

“This why my packages always late,” another joked.

Update 12:30pm CT Nov. 8: When reached for comment, Amazon spokesperson Maria Boschetti told the Daily Dot in a statement: “This does not reflect the high standards we have for drivers. While the driver denied any illicit activity, it is a policy violation to have unauthorized passengers in delivery vehicles, and the driver is no longer delivering packages for Amazon.”