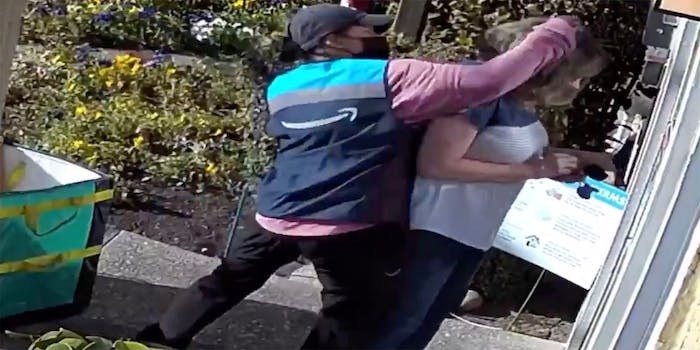 In a statement, Amazon said: 'This does not reflect the high standards we have for drivers who deliver our packages.'

Surveillance video at an apartment complex in the Bay Area captured an Amazon driver beating up a 67-year-old woman. The driver has now been arrested in connection with the case.

The incident happened last Thursday at a Castro Valley, California apartment complex, according to KRON4‘s reporting. Station reporter Maureen Kelly tweeted the 45-second video from her account, labeling it a “shocking video” and sharing some of the details from the case.

The driver and the victim were engaged in a verbal confrontation prior to the attack. According to the Alameda County Sheriff’s Office, which arrested 21-year-old Itzel Ramirez in connection with the fight, the victim may have called the driver a bitch as she turned to go back inside. The driver then “set upon her, striking her repeatedly,” which bears out with video evidence.

The sheriff’s office is stating that Ramirez hit the victim an estimated 10 times, primarily in the face and head, leaving her with a possible broken nose and visible facial injuries. While Ramirez admitted to officers that she hit the woman, the sheriff’s office is saying she contended she was acting in self-defense.

SFist, also reporting on the incident, said Ramirez was booked on two counts of elder abuse and battery involving serious bodily injury, set to be arraigned today, and being held on $100,000 bail. The publication also noted that the victim in the case did not want to talk to media.

“It was frightening to see an Amazon driver do that, somebody who we allow onto the property to provide us a service,” said Doug Smith, property owner of the apartment complex, to KRON4.

Amazon made a statement about the incident, noting, “This does not reflect the high standards we have for drivers who deliver our packages. We take these matters seriously and this individual is no longer delivering Amazon packages.”