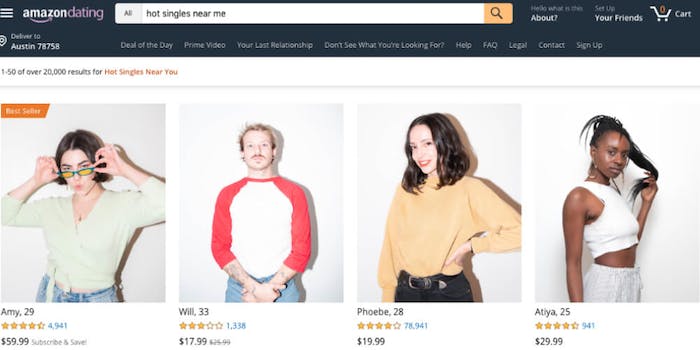 Visitors can 'choose' from over 40 singles at varying prices and ratings.

But if you click on the “About” page on the “Amazon Dating” website, you’ll discover it’s all a joke–albeit one aptly appropriate for Valentine’s Day coming up and done so well it seems almost real.

i wasn’t having much luck with dating apps so i partnered with @amazon to make a better one 👀💘https://t.co/ticxR7j7CO

The website is an intuitive take on Amazon‘s official website, but instead of delivering packages, this site “delivers” dates—Prime options included, of course. Visitors can “choose” from over 40 singles at varying prices and ratings. They even have the option to “choose” their ideal date’s height and love language.

Ani Acopian, Suzy Shinn, Morgan Gruer, and animation studio Thinko are behind the creation of Amazon Dating, according to the website.

Update 10:47pm CT, Feb. 4: “There’s no end goal,” Acopian and Shinn told the Daily Dot in a joint email. “Anyone can do anything they want with it. Hopefully meet someone cool.”

Acopian and Shinn are both based in Los Angeles. Acopian is a video director and Shinn is a recording engineer, producer, and songwriter. They said today’s dating and internet culture served as inspiration for Amazon Dating.

“I think we’re (in) a culture of wanting something now, not later and wanting the best,” they added.

Past stunts include creating the site Who Paid 99 Cents, in which visitors pay 99 cents to see who paid 99 cents prior to them and so on. (Think of it as an informal online pyramid scheme, D’Silva said.) Another Thinko-created website is ScamDaddy.net, a play on the company GoDaddy that “tests” stolen credit cards.

“We like building funny things,” D’Silva said of Thinko. “One of our favorite things is to make computers do dumb things.”

D’Silva said the goal is to often end up with a cease-and-desist letter. However, Thinko hasn’t seen many objections to its online stunts, he said.

“We’ve got a few take downs and stuff but I feel if you lean really hard into parody it’s hard for things (to get taken) from you,” D’Silva said.

YouTuber Anna Russett took the latest stunt even further, doing a YouTube-style unboxing of her new “date” for audiences to see.

Internet punchlines inundate Amazon Dating, where a joke lies at the end of almost every click. For example, clicking on the menu option “Your Last Relationship” takes visitors to the music video for Britney Spears’ 2003 hit “Toxic.” Also, for users who want to make sure their order doesn’t ghost them, the legal section of the website offers a “Non-Ghosting Agreement.”

If visitors want in on the joke by having their “profile” up on the website, all they have to do is apply here.