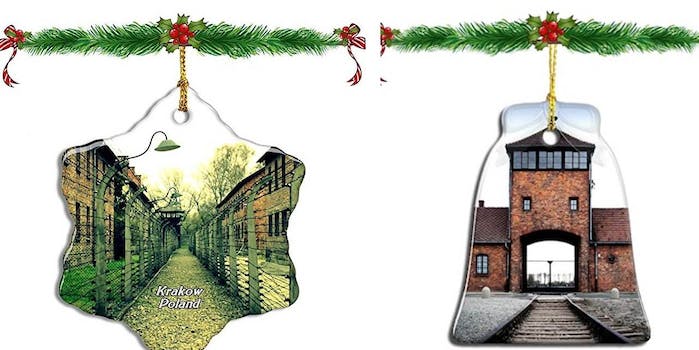 Amazon has come under fire after it was discovered that Christmas decor featuring Holocaust concentration camp photos were being sold on the site.

The Auschwitz Memorial, with almost 800,000 followers on Twitter, shared screenshots of Amazon’s products on Sunday, sparking a massive backlash from consumers and descendants and/or family members of many who perished in the infamous Nazi concentration camp, where nearly one million Jews were killed during the Holocaust.

“Selling ‘Christmas ornaments’ with images of Auschwitz does not seem appropriate,” the Auschwitz Memorial said in a tweet on Sunday, calling on Amazon to remove the items. “Auschwitz on a bottle opener is rather disturbing and disrespectful.”

Selling "Christmas ornaments" with images of Auschwitz does not seem appropriate. Auschwitz on a bottle opener is rather disturbing and disrespectful. We ask @amazon to remove the items of those suppliers. https://t.co/0uG2JG558e pic.twitter.com/ucZoTWPk1W

The products were not available on Monday morning when the Daily Dot ran a search on Amazon, but the links still appeared on Google searches. Screenshots shared by Auschwitz Memorial on Twitter show a “tree decor souvenir” and a bottle opener fridge magnet with photos of what appears to be a concentration camp. The images are of brown buildings with barbed wire, the exact imagery of concentration camps that have been documented. The bottle cap opener and one of the tree decors has a photo caption of “Krakow Poland.” Krakow is about 40 miles from where the Auschwitz camp is located and is one of the central transit spots of getting to Auschwitz.

Another “tree decor” shows the entrance of the Auschwitz concentration camp and was advertised on the website as “Poland Auschwitz War Camp Prison Christmas Ornament.” The bottle opener magnet was being sold for $12.99. The prices for others weren’t available in the screenshots.

A screenshot of another product, by another seller “Tree26,” showed a mousepad with “Massacre Auschwitcz [sic] Birkenau Jewish Death”—a thumbnail of the link to that product page showed it was being sold on Amazon, though the product is no longer available.

@amazon , clean up your act! Get this product off your site now, please. pic.twitter.com/Fh7UUiBtcu

The gifts were posted on Amazon by a seller titled “Fcheng” whose profile shows they sell similar magnets and ornaments based off city souvenirs. The manufacturer listed on the other products by Fcheng was “Jollin Travel Gifts.”

Many expressed their frustration at the idea that anyone on Amazon would consider this acceptable to sell:

As the Grandson of Holocaust survivors who had to endure the traumas of Auschwitz, I find this disgusting, repulsive, and unbecoming of a company like @amazon or any single American company. I don’t understand how something like this gets made in this day and age, let alone sold. https://t.co/JvhVEFXLK5

In current day America, I think we know exactly who would purchase these.
Those who think that there are "some very fine people on both sides."

Jeff Bezo's @amazon I join my family's voice w/ @AuschwitzMuseum to request you IMMEDIATELY REMOVE all "holiday" ornaments and other "gifts" for sale that display Auschwitz. Not only is this disrespectful but SHAMEFUL that someone in your org would even think this appropriate!

And there were quite a few Stephen Miller references, likely given a recent report that exposed his explicit ties and allegiance to white supremacy:

The Memorial’s page had posted their initial tweet early Sunday morning, and by the afternoon—after about 10 hours—Amazon finally took down the listings, according to a follow-up tweet by the Memorial:

It seems that @amazon has removed all of the "Christmas ornaments" with the images of the former Auschwitz camp. Thank you everyone for your activity and response. https://t.co/VGFnSDMWM9

The Daily Dot has reached out to Amazon and will update the report if it responds. Amazon told the New York Times in a statement that “all sellers must follow our selling guidelines and those who do not will be subject to action, including potential removal of their account.”

According to Amazon’s guidelines, products “related to human tragedies” are not allowed to be sold on the platform, and a user risks being suspended—temporarily or permanently, based on the “appropriateness of listings on its site.” As of Monday morning, other products by the seller were still on the platform.