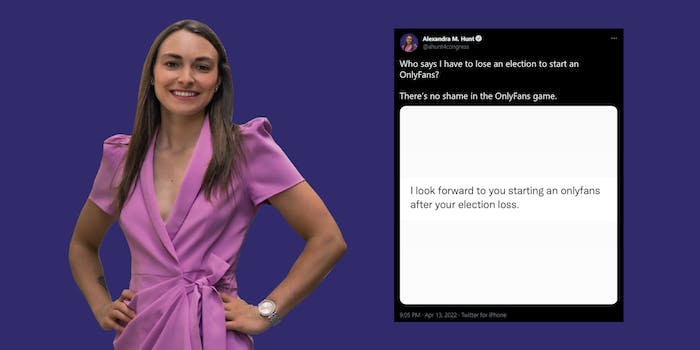 'brb moving to philly so i can vote for you.'

A Democratic candidate for Pennsylvania’s third congressional district running on a platform of social, racial, and economic justice is making waves on TikTok with a video referencing one of her former professions: stripping.

According to her campaign website, Alexandra Hunt is a public health researcher and girls’ soccer coach—as well as a former exotic dancer.

Commenters on TikTok found it amusing.

“Wait, this is a cool way to fund a campaign,” one commenter wrote.

“That would be some real grassroots fundraising,” another wrote.

“I so wish I could vote for you,” a commenter wrote. “I’m ready to move to your district just so I can vote for you.”

On Twitter, the move made a larger splash but was well-received.

“Keep holding your head high Alexandra,” one user responded. “You’ve got fans all the way in Kansas and Colorado rooting for you!

“I’d much rather my congressional rep earns extra money on Onlyfans than from corporate special interests,” another wrote.

“I don’t know if you intend to ever make a bid for president, but having a major political leader with an onlyfans (current or past/inactive account) would be amazing,” another user wrote.

The Daily Dot has reached out to Alexandra Hunt’s campaign via email regarding the video.