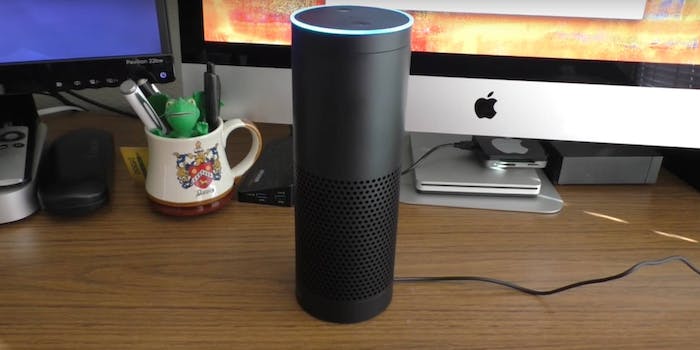 The internet of things is creating a privacy concern on a scale we've never seen.

Amazon has declined to give police in Arkansas recordings from one of its Echo devices that may have overheard details of a murder. According to The Information, authorities in Bentonville issued a warrant for Amazon to turn over any audio recordings from the Echo belonging to Andrew Bates, who is set to go on trial for first-degree murder next year.

The Amazon Echo is an always-on device, which means it is passively listening for audio cues at all times. The police want to look into what the device may have heard between Nov. 21 and Nov. 22, 2015. While the Echo records only after hearing so-called “wake words” (like “Alexa”), police hope background noises may have triggered the device to begin documenting the scene.

Amazon stores all voice recordings to help improve its assistant’s service. There is no way of preventing this.

Authorities were able to pull some data off the speaker, but specific details have not been released. Amazon declined police requests to allow access to private information from the smart speakers, but it did provide police with Bates’ account details and purchasing information.

“You have an expectation of privacy in your home, and I have a big problem that law enforcement can use the technology that advances our quality of life against us,” Bates’ defense attorney Kimberly Weber said, according to Engadget.

Police are becoming more aware of the sort of data being tracked by internet of things (IoT) devices found in our homes. But even less likely devices are full of potentially useful data: The Bentonville police already looked at Bates’ water meters and discovered 140 gallons of water was released between 1am and 3am the night Collins was found dead in Bates’ hot tub. Investigators say water was used to wash away evidence.

There are approximately 5 million Echos sitting in houses around the world, and its popularity continues to grow. Amazon sold nine times the number of its devices this year than it did over the same period last year. It will be important to keep close track of early decisions regarding data privacy, especially given the growing number of IoT devices in our homes and businesses.