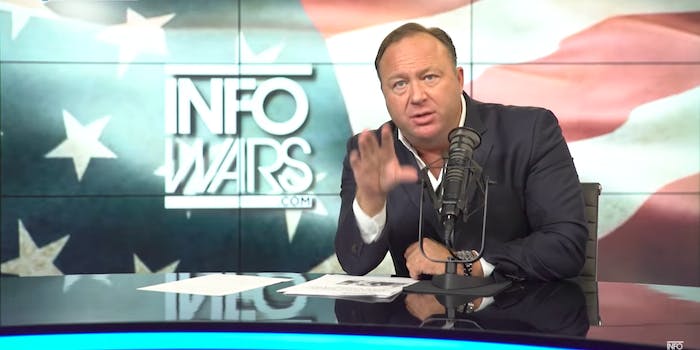 During the early hours of Friday, Infowars host and conspiracy theorist Alex Jones leaked the “full” interview between him and NBC host Megyn Kelly, originally scheduled to premiere on Sunday.

Except he didn’t—though he wanted to at least give the impression that he was, and also wanted to send a message that he eventually could.

In his half-hour-long video, with the intentionally misleading title “Alex Jones Megyn Kelly Full Interview Leaked,” Jones took issue with the Sunday Night with Megyn Kelly promo Kelly issued earlier this week and he promised to publish his own recordings from their interview to show how pieced-together Kelly’s “hit piece” was.

Next Sunday, I sit down with conservative radio host @RealAlexJones to discuss controversies and conspiracies #SundayNight June 18 on NBC pic.twitter.com/7bVz6Fobf5

In the video, Jones juxtaposes Kelly’s interview promo—in which he delves into statements on his Sandy Hook and Sept. 11 conspiracies—with a pre-interview phone call between him and Kelly, in which Kelly promises she won’t turn their broadcast interview into a “hit piece.” While Jones asserts that Kelly said she wanted to do a “softball” piece on him instead of rail him on his Infowars “persona,” the phone call indicates that Kelly said she wanted to profile him, and would still ask him questions about his theories.

That said, in a very “gotcha” manner, Kelly’s promo depicts Jones as an irrational, conspiracy-craven talking head. Jones even takes issue with the fact that Kelly didn’t include the part of his Sandy Hook hoax theory where he admits to believing people died in the school shooting.

But that’s the thing about television promos—even if Kelly’s full interview ends up being one entire “gotcha” like Jones fears, these promotional clips don’t include the full story for a reason. In NBC and Kelly’s case, depicting Jones as a deranged and monstrous being—no matter how reasonable he might appear in the full piece—is a sure-fire way to get attention from his followers and from the people intrigued by his subversive nature, as well as hate-watches from people who find his messages downright toxic and revolting.

In depicting him as unhinged above all else, NBC can also avoid being criticized by the people who are most offended and harmed by his conspiracy claims, at least until the real interview airs.

However, should Kelly’s interview be just as manipulated and “damaging” to Jones’ character as the promo itself, Jones has the receipts. Page Six reports that NBC has allegedly re-edited the interview in order to appear “harder” on him, and have included family of Sandy Hook victims after Kelly faced backlash from a Sandy Hook nonprofit. Jones’ own recordings of the interview won’t necessarily convince viewers of the separation between himself and his Infowars “character,” but might be more revealing of NBC’s and Kelly’s character, instead.

Nonetheless, Jones’ non-leak “leak” has his supporters and members of the far- and alt-right media praising the Infowars host’s intelligence for taping his interview with Kelly. Others on the left who criticized NBC for hiring Kelly and Kelly for interviewing Jones have also pointed out how this could potentially be a moment in which both entities ended up playing themselves.

I do love that Alex Jones played Megyn Kelly. I hope that those MSNBC folks realize how ridiculous it is that she's on the network.

It is becoming increasingly clear that @megynkelly and her superiors at NBC News did not think this through at all. https://t.co/RfBbjEhdJ7

For those just tuning in, Alex Jones says he's going to "expose" Megyn Kelly by releasing audio he taped: https://t.co/vwLO3hvlGZ

NBC, however, released a statement saying they’re committed to “getting this serious story right.”

Kelly’s interview with Jones is scheduled to air Sunday, June 16.