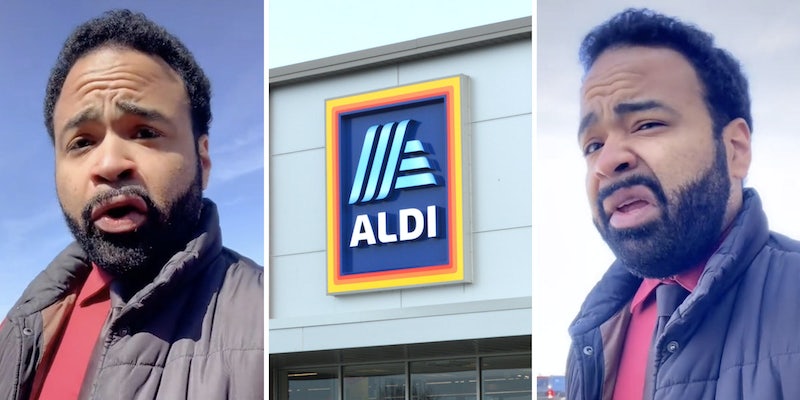 ‘Some managers just want to see workers struggle’: Former Aldi cashier says he was written-up for sitting in his chair ‘too comfortably’

'I thought it was a goddamn joke.'

A TikToker who claims to be a former Aldi cashier says he was once written up for sitting in his chair “too comfortably” while on the job. Aldi is known for allowing its cashiers to sit behind their register.

The TikToker shared the story of his “bullshit write up” on TikTok (@retailkingb), where his testimony received more than 18,000 views.

“One of the cool things about Aldi is the cashier gets sit down on a chair, which I thought was pretty awesome. You get to sit down while you work,” the TikToker says in the video.

He says that one day while he was working at Aldi, he was ringing customers up “like super fast.” Then, he says the store manager, “Colleen,” called him into her office.

“She gave me a write up for sitting on the chair too comfortably,” the TikToker says. “And when she tells me this, I thought it was a goddamn joke.”

The TikToker says the manager told him the chairs weren’t intended “lounge around” in. Instead, he says she said that he should sit in the chair with his back arched forward so that he can “maximize his items per minute.”

The TikToker says it was a “bullshit write up” because he was already the fastest cashier at the store. He adds that although the pay was good, he only worked at Aldi for a few months because of “bullshit” like the write up.

Viewers largely sympathized with the TikToker and his experience with a bad manager.

“Some managers just want to see workers suffer or else they think they aren’t working,” one viewer commented on the video.

“What I learned about hard work is that everyone wants to see you struggle,” another viewer commented.

One viewer wrote, “Individual managers make a job good or bad. If a manager is fair and knows their job, people respect them and stay longer.”

One TikTok user said the former cashier should have replaced Colleen as the manager. He replied in a comment, “Screw that company, the cashier shouldn’t be responsible for all the tasks they have there. It’s ridiculous. Should change position name to ‘slave.'”

Another user shared their own experience of allegedly working at Aldi: “worked at an aldi for a year, one of the places that treats you the worst in terms of workplace balance and in terms of basic human rights.”

The Daily Dot reached out to user @retailkingb via TikTok comment and to Aldi via email.