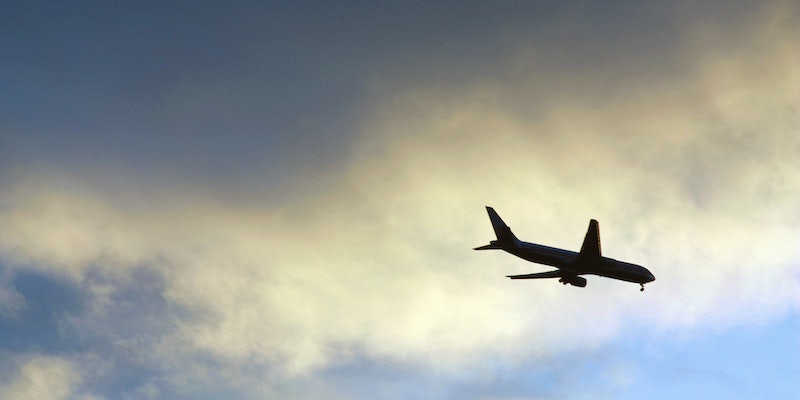 Amid a news cycle dominated by stories of the president telling congresswomen of color to “go back” to where they came from, it’s difficult to think of how such ingrained racism can be undone. But a thread on Twitter documenting a particularly effective clap back to a man’s racist comment is giving people hope.

Author Jaime Primak shared the story on Tuesday of a man who asked her to stop speaking Spanish on an early morning flight. But the incident didn’t spiral downward. Instead, the flight attendant and another man seated next to the racist passenger started speaking Spanish.

This man just asked me to “please stop speaking Spanish” on this plane to NYC (in his defense it’s very early and he’s racist) so the man next to him STARTED SPEAKING SPANISH and then the flight attendant and my GOD i have never wanted to get up and dance more than i do now.

It’s not clear which airline the incident took place on, and Primak did not immediately respond to the Daily Dot’s request for an interview.

People’s responses to her tweet are wholesome, a reminder that we’re not as alone as we think when a random white person tries to shut us up for speaking our native language. Many said they would have started speaking Spanish—even though they’re not fluent—just to piss off the guy.

Embarrassingly, I only know a small amount of medical Spanish, but I’d like to think I would have participated by using it to ask him how long he had this problem in his mouth and how many times a day.

I can’t speak Spanish but would probably have started swearing at him in a variety of other languages. I had a rather international upbringing & can swear in French, Dutch, German, Arabic, Turkish & Hong Kong Chinese (had a Chinese roommate at school)

Some shared their own experiences with being told by strangers to stop speaking their native language.

Hahaha! I did the same thing. Was on Costco line and this guy asked to me stop speaking my mother tongue to my parent (they were on the phone w/ me in another country). This lady in front me rolled her eyes and started cursing at the guy in German. Danke Schön!

I once had a racist ask me the same thing, so I switched to French and told him, “Je suis désolé que vous soyez stupide et que vous ne parlez qu'une seule langue.”

Incidents like these are far too common. Midtown lawyer Aaron Schlossberg was entirely canceled for threatening to call ICE on two women for speaking Spanish, and a white woman was chased out of a grocery store by another white woman who asked two shoppers not to speak Spanish.

On Twitter, some said they’ve planned their own clapbacks in case something similar happens to hem.

I keep waiting for this to happen to me. I’m the child of immigrants and though I was born here, English wasn’t my first language. I speak with my grandma in her native tongue and I’m loud. Come at me.

Bold of you to assume they can tell the difference.

Let me go ahead and open up my @duolingo and practice this espanol!

I would instantly start chanting “Donde esta el banyo, por favor?” and then block his path to the bathroom because that’s the most important phrase you can know in Spanish.

It’s been a rough week for immigrants, people of color, and probably anyone who speaks a native language other than English. A crowd chanted “Send her back!” at President Donald Trump’s rally on Wednesday amid his continued racist attacks on congresswomen. But Primak’s thread, including others’ responses, is reason enough to hope that more and more bystanders are ready to fight back.