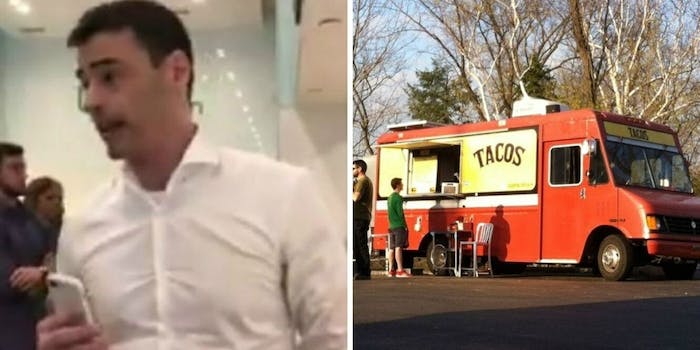 The band will play 'La Cucaracha,' aka 'The Cockroach.'

Ever since lawyer Aaron Schlossberg went viral this week for lambasting and threatening to call immigration authorities on Spanish speakers at a New York lunch spot, he’s been chased down the street by videographers and kicked out of his Madison Avenue office.

Now, a GoFundMe account has been created to bring him some additional cheer—with a taco truck and a mariachi band.

Schlossberg was caught on video this week at a Fresh Kitchen restaurant blasting a couple of customers speaking Spanish. He told a manager, “Your clients and your staff are speaking Spanish to staff when they should be speaking English … My guess is they’re undocumented, so my next call is to ICE to have each one of them taken out of my country. If they have the balls to come here and live off my money—I pay for their welfare. I pay for their ability to be here.”

Thanks to internet sleuthing, Schlossberg also was found to be in a video featuring Donald Trump supporters yelling at Jews who support Palestine. On Thursday, he was chased down the street by videographers while hiding his face in an umbrella.

Oh, Aaron Schlossberg, it must be awful to be accosted by a stranger when you're just trying to work and go about your day. pic.twitter.com/tndpgYB6VC

Now, a GoFundMe called “Mariachis for Aaron Schlossberg” that set a goal of $500 to raise money to send Schlossberg a mariachi band and a taco truck has more than doubled its goal. The crowdfunding effort, led by Mark Goldberg, was “to send a mariachi band to cheer up the staff and attorneys at The Law Office of Aaron M. Schlossberg Esq. P.L.L.C. after a difficult day.”

The mariachi band would sing “La Cucaracha” (“The Cockroach”), and any leftover money would be used to send a taco truck to Schlossberg’s staff and legal literature about how undocumented immigrants actually don’t qualify for welfare.

After receiving $1,094, Goldberg cut off donations and said he’d send the mariachi band, the taco truck, and some additional party favors. But he also wrote that “we decided to not disclose the date and time since some on 4chan noticed and want to send people there on Friday to counter it. We are rescheduling and will not announce time/day.”

But like Schlossberg’s original rant, the event will be recorded on video. Wrote Goldberg, “We are countering hate and racism with the sounds of music.” And of course, all those delicious tacos.