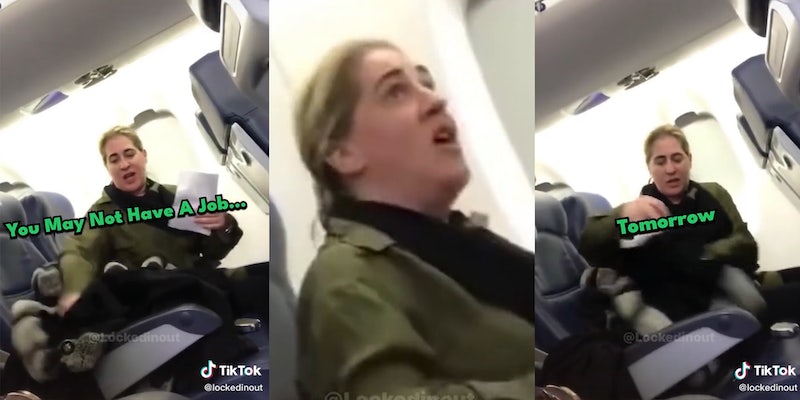 ‘I want this lady off the plane’: Karen gets kicked off flight after refusing to sit next to a baby

A flight attendant allegedly booted a woman from an airplane because the so-called “Karen” refused to sit next to a baby on the flight.

A TikTok posted by @lockedinout on June 1 shows a woman saying that she’s “not sitting next to a crying baby.” The baby’s mother responds saying that her child won’t cry the entire flight.

“I want your name,” the woman says to the flight attendant. “You may not have a job tomorrow.”

That’s when the flight attendant, named Tabitha, says, “I want this lady off the plane.”

“I’ll be quiet now,” the woman responds. “I’m sorry. I was really stressed out.”

On Wednesday, the TikTok had over 20 million views.

Karen Kicked Off Flight And Lost Her Job

@lockedinout wrote in the video’s caption that the woman “lost her job” and claims that she used to work for the New York State Council on the Arts, which did not immediately respond to the Daily Dot’s request for comment. The TikTok states that the woman is currently on a leave of absence.

Commenters on the TikTok sided with Tabitha, the flight attendant.

“Somebody’s job is in jeopardy but it’s not Tabitha’s,” @spiceblend1 wrote.

“In a world of Karens, be a Tabitha,” @realjessicaofnewjersey commented.

Others noted how quickly the woman changed her attitude and asked to stay on the plane after Tabitha said she needed to leave.

“‘Wait, consequences for my actions? Don’t do that, I’ll stop, I promise,'” @kingsrivers95 wrote.

“People get so bold like this on airplanes forgetting how easily they can get kicked off,” @chocolateoatmilk_ commented.

The Daily Dot reached out to @lockedinout via email.