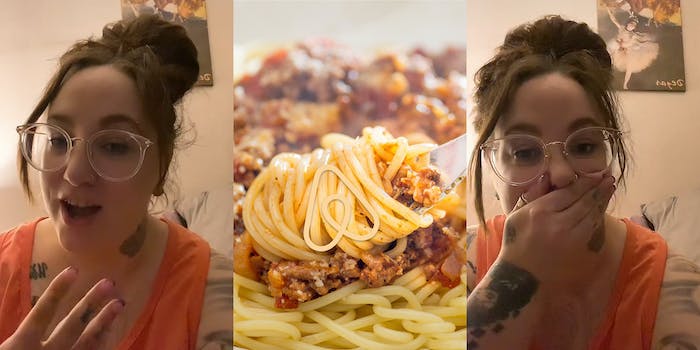 'It could've been an honest mistake.'

It seems like the era of Airbnb is inching closer to being over, as a rising tide of complaints against the home rental company is sweeping the internet by storm. The latest horror story involving an Airbnb rental came from TikToker Kendall Marie, who claims to be a former Airbnb employee.

Marie, who posts under the username @msmysteryjones, says she has a plethora of horror stories about working for the company. Her “favorite,” she says, is about a host who allegedly fed their guests spaghetti with dog food in it.

Marie explains that she received a complaint about a host wrongfully listing their rental as a “private space” when it was in fact a shared space. She says she let the host know to change the listing immediately or she could face penalties. The guests who made the complaint were allegedly really nice about it, but then they dropped a bomb on Marie.

“The [guests] were like, ‘hey, here’s this second problem. She made us spaghetti,’” she says. “I was like, ‘oh well, that was really nice of her.’”

But Marie says the guests proceeded to tell her that the welcome meal had tasted weird, which prompted them to search the host’s garbage.

“‘We couldn’t find any canned ground beef or canned ground meat or any styrofoam packaging for ground meat,’” Marie claims the guests told her. “‘We did find an empty can of dog food, though.’”

In the video, Marie smacks a hand over her mouth in shock. “The amount of reviews that I had to look over and the people praising her welcome spaghetti was… trauma,” she says.

“Refund money exchanged hands that day,” she added in the caption.

In the comments section, users argued whether or not it was safe to take food from strangers, while others tried to give the host the benefit of the doubt.

“This is why my parents taught me to never eat somewhere if you haven’t seen it been cooked and you don’t [know] the person personally,” a user wrote.

“Maybe the meat had been in her freezer in Tupperware?” another suggested.

“There was zero proof it was dog food though so ya,” a third said.

Others rallied against the home rental company in general, bringing up the recent controversy of Airbnb ruining the home market in cities.

“Airbnbs are ruining rental markets in my hometown so many are forced to move. It’s frustrating,” one user said.

“Airbnb are wild right now. most of hotels are cheaper [than some] rat holes listed on airbnb,” another wrote.

In a follow-up video, Marie says she had to ask her supervisor how much refund money to authorize for the guests who “think they ate spaghetti made with dog food.”

She also goes over theories as to why a host would cook the meal with dog food, saying that perhaps because the host was an elderly lady, she confused canned beef with canned dog food.

“She did have a dog,” Marie says. “It could’ve been an honest mistake. Either way, I just felt really bad about the whole situation.”

Marie told the Daily Dot the incident occurred in 2019 and that the Airbnb listing was located in the southern United States. While the guests did not leave a negative review and were happy with the resolution, Marie said this was by far her most “bizarre” encounter with a listing.

“I wouldn’t say overall this was a horror story, but it was definitely a very high-stress job when dealing with people because of how fast things needed to be resolved sometimes, as well as upset guests and hosts taking out their frustrations on us,” she wrote via Instagram direct message.

Marie said that while she did enjoy working at Airbnb and helping out people in difficult situations, she’s also critical of people using Airbnbs to take away affordable homes and turn them into listings. She referenced the infamous quote from Christopher Nolan’s The Dark Knight.

“What’s the quote you either die a hero or live long enough to see yourself become the villain? Something like that,” she said.

Update 11:16am CT June 27: In a follow-up video, Marie notes that she worked for a call center company that was contracted by Airbnb to handle customer service.