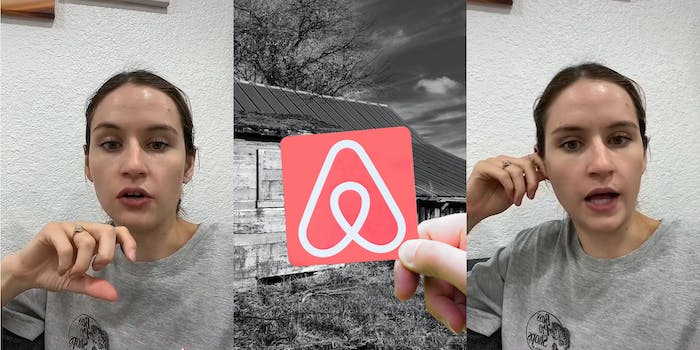 ‘I can’t imagine if someone else had stayed there and there was an actual fire’: TikToker says she and her family stayed in a windowless Airbnb for a month

'Even if it’s cheap you shouldn’t be at risk of burning alive.'

A woman shares her experience renting an Airbnb that allegedly illegally has no windows, calling it a “lesson learned,” in a viral TikTok.

Heather Williams (@noworheather) posted the clip on Saturday in response to another TikToker’s post about how the “era of the Airbnb is done.”

In William’s TikTok, she describes the Airbnb she’s currently staying in.

“The owner has his main house and then he took his garage and a separate room and converted those into two separate Airbnbs,” she says. “The one that we’re staying in does not have any windows so we have no idea what time of day it is.”

“We have to keep the kitchen light on at all times because it’s literally pitch black if you turn off any lights,” she continues. “Also, there’s no thermostat so you can’t control the temperature because that’s in the main house.”

In the comments, Williams shared how the listing didn’t mention the lack of windows or thermostat, just “a basic overview.”

In a later TikTok, Williams explains more about why she and her family rented the place. She says they were moving and needed a “place to stay for an entire month.” They tried to get a fully furnished apartment but “that was a nightmare,” and went from an Airbnb that didn’t work out to a hotel. Since they have a cat, she says they needed something “private” and a “fully furnished Airbnb” that was affordable.

She also adds that she and her husband “just don’t rent [Airbnbs] because it’s expensive.”

When they found this Airbnb, she said the place looked nice and new in the photos. It had one review that was good, so they didn’t think anything of it.

“Big mistake on our part,” she says.

“We couldn’t tell from the pictures [it had no windows] until we got in there and we were like, wow, it has no windows,” she continues.

The creator says they didn’t even know that an Airbnb with no windows is illegal.

“We are going to contact the city and Airbnb because even though the guy was really nice, the place was pretty clean for what it was,” she says. “That is unacceptable because it is a safety hazard.”

In some states, like New York, windowless bedrooms are illegal, and Airbnb explicitly states that you must follow building and housing standards. Almost everywhere in the United States require basement bedrooms to have a window at least 24 inches high. Research has found that living in a room with no windows can affect your sleep quality and negatively impact your mental health.

The Daily Dot has reached out to Williams via Instagram direct message and Airbnb via email.