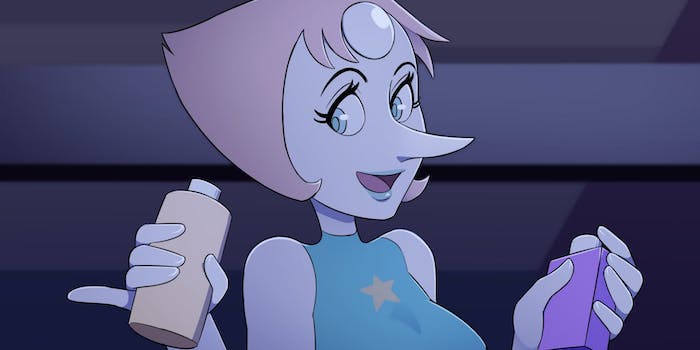 The game stars Pearl and Amethyst.

Steven Universe: The Movie is out now, and it’s rekindling fans’ interest in the series. But what if you want something more intimate than a new movie? Like, what if you want to sleep with the Crystal Gems?

Developed by programmer Rilogator and artist Digitalkaiju, Gem Blast’s creators “plan on doing more content like this (and hopefully better)” in the near future, along with adding more material to the game. “It’s short, it’s sweet, I hope you like it. Here’s the first iteration of the project I’ve been spending a month of work off and on with my good friend Rilogator,” Digitalkaiju tweeted last month.

It's short, it's sweet, I hope you like it. Here's the first iteration of the project I've been spending a month of work off and on with my good friend Rilogator.
PC-https://t.co/8Gad55ogym
Mac-https://t.co/SsPtjaUd99
itch.io-https://t.co/l8cnJstyXw pic.twitter.com/2z8LvgFV1n

“There’s a balance of written content to visual content to interactivity and everyone wants a different ratio of those things,” Rilogator said. “We’re currently working on a content update based on the feedback we received so far. Parsing through all the comments to find out [what] will make the most people happy is nearly a gamble, but we try to deliver quality content no matter what.”

It’s no secret that players are already in love with the fangame, partially because Gem Blast’s artwork and writing both feel right at home within the Steven Universe canon. The game racked up over 13,000 views on Newgrounds alone, along with an additional 4,500 visits on itch.io.

While short, Gem Blast is available for PC and Mac on itch.io and online via Newgrounds. Fans interested in supporting the game’s creators can head over to Digitalkaiju’s Patreon page and join their Discord. In the meantime, more content is expected for Gem Blast “within the week,” Rilogator said, “featuring new scenes for Garnet, Amethyst, and Pearl.”

“The attention we got surpassed even our highest expectations,” Rilogator said. “We’re very optimistic for the future.”