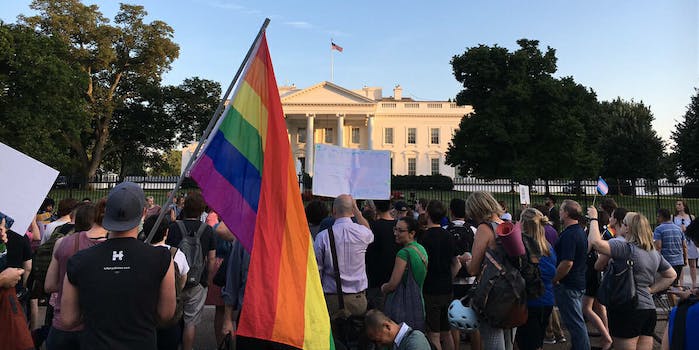 On Wednesday morning, President Donald Trump turned to Twitter to announce a ban on transgender troops serving in the armed forces. The news was met with outrage from LGBTQ activists, veterans, and politicians on both sides of the aisle, leading many across the nation to protest the president’s ban by nightfall.

“America! Refuse to be gaslit!” one protester’s sign read. “None of this is ‘Normal.'”

Times Square protest. @realDonaldTrump , you should be ashamed of yourself. #transrightsarehumanrights #lgbtq pic.twitter.com/1Jn2iV8d46

Meanwhile, in San Francisco, activists marched against the transgender ban, gathering at Harvey Milk Plaza in the Castro district. Marchers held up signs that read “Trans Lives Matter!” and “Trans Rights Are Human Rights.” San Francisco mayoral candidate Mark Leno met with protesters during the march as well, according to the San Francisco Examiner‘s Jessica Christian.

.@MarkLeno is here at #SF's #transgender military ban protest in the Castro pic.twitter.com/Y6WJhYgmj9

In Washington, D.C., over a hundred protesters came to the White House, denouncing the president’s tweets with chants and signs. According to ABC News, protesters included transgender service members and veterans slamming the ban.

“I was actually really shocked and angry, I don’t know how he came to that conclusion so fast,” transgender woman and Navy veteran Kara Zajac told ABC affiliate WJLA.

Political protests have erupted around the country since Trump was elected, as people pour into the streets to decry his policies, rhetoric, and alignment with the far right. And with no shortage of executive orders, bills, and actions targeting marginalized communities and the poor, the unrest doesn’t seem likely to die down anytime soon.